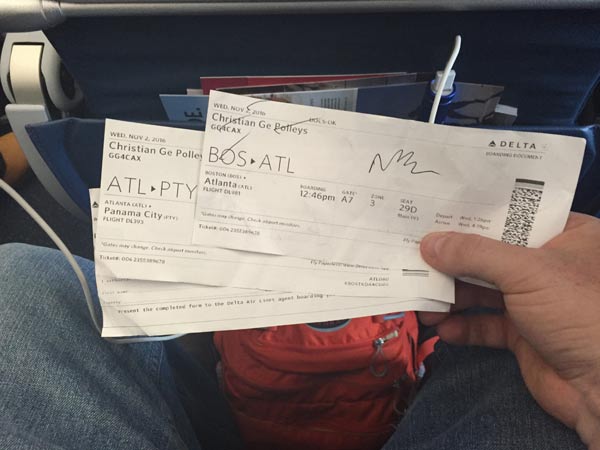 Having “Proof of Onward Travel” is a very annoying thing. Backpackers and travelers feel the sting of it once in a while. If you’ve only bought round-trip flights to another country, you’ve probably never had this issue. However, if you’ve ever bought a one-way flight then there’s a good chance you’ve had an immigration officer task you if you have Proof of Onward Travel.

It’s simple really. One-way travel is frowned upon by immigration’s officers because it means you could become a squatter. Countries don’t want people visiting and then deciding to stay for longer than a month or so. If you stay in the country longer than you are welcome, then you are breaking the law. To prevent this, they will require that you show them some form of proof that you have plans to leave their country. The proof you can provide can be a return airline ticket, a bus pass to another country or a train ticket. Every immigration’s office will accept different things.

If you don’t have any proof, then the airline is responsible for returning you to your home country. This means that the burden is on the airline…which also means that the airlines are the ones that will give you a hard time before you are even allowed to step on an airplane.

Why can it be an issue for travelers?

Say you buy a one-way flight to South America because you want to visit 3-4 countries over a few months. You’re not sure exactly when you will return from your trip. Similarly, you may not know which country you will be returning home from. So you wing it. When you get to the airline check-in, the nice woman at the counter asks for Proof of Onward Travel. She knows that the airline will have to return you to your home country FOR FREE if immigration turns you away after the flight lands in their country. You explain your story, but they don’t listen.

How to deal with it?

FlyOnward is a newer solution that I haven’t tried. They basically book you a flight that they will cancel within 48 hours. This gives you some form of “Proof” to show the airline and the immigration’s office. This is a real ticket. If the airline wanted to go as far as look up the flight confirmation, they would find a legitimate flight. This is a good option, if it truly works.

Some people also do dubious things like write/photoshop fake tickets. There are a couple issues with this. First, if the tickets don’t align with actual flights, then you could get busted. I’m not certain how they enforce their rules/laws regarding violations. Second, even if it is a real flight

From my understanding, airline personnel and immigration offices don’t really care. They just want to see some form of proof you won’t stay longer than desired and 75% of the time they don’t even bother to ask for it. However, if they do ask you’ll need to show them something. If you don’t have anything you’ll miss your one-way flight to your beautiful destination. That will be a bad day for you.