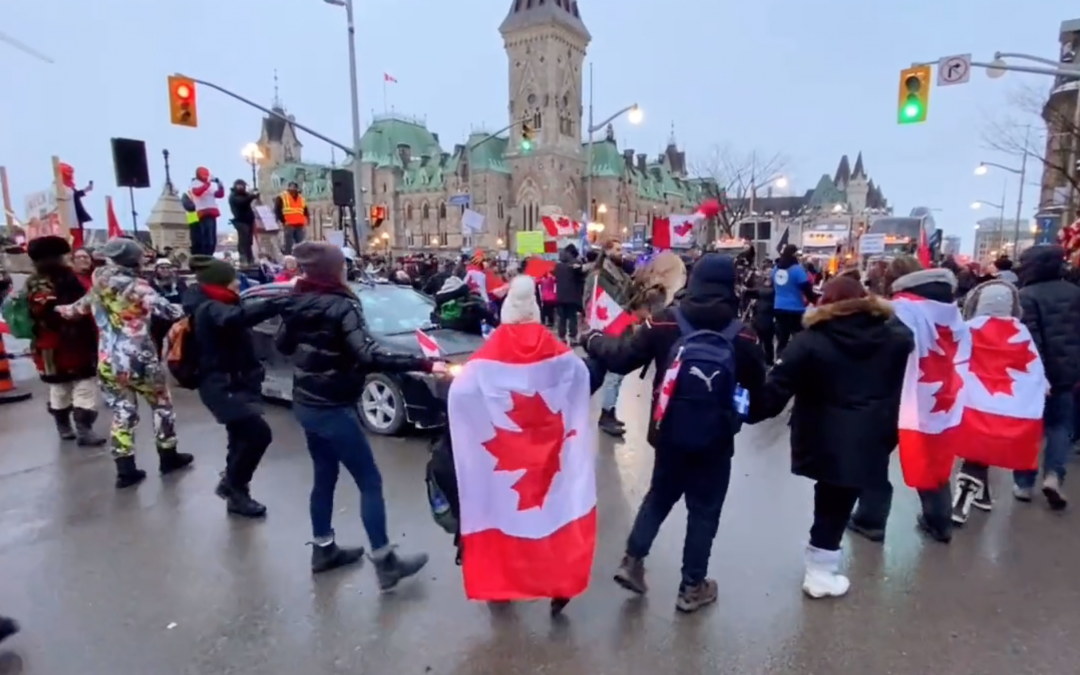 A lot has been happening recently in Canada as pressure mounts between authoritarian government overreach and Canadians that are tired of their government’s mandates – including an enormous group of truck drivers that have united to become what is called the Freedom Convoy.

The Freedom Convoy is essentially a group of tens of thousands of truckers that have joined together in effort to raise awareness and push back against the suffocating vaccine mandates imposed by Justin Trudeau, the sitting Prime Minister of Canada.

The vaccines have resulted in the creation of numerous new billionaires in Big Pharma. On the other side of the coin, workers and citizens are pushing back desperately to work to feed their family and regain some semblance of normalcy, nearly all of which continues to be stifled through ongoing government overreach.

The Freedom Convoy, also called the “Honkening”, initially raised more than $10 Million over the course of three weeks, only for their fundraising platform, called GoFundMe, to cancel their campaign and force their raised funds back to their donors, a political move that may have destroyed GoFundMe’s brand and reputation. Fortunately for freedom-loving Canadians, the workers have united again to create a campaign page on a different platform.

GiveSendGo is a fundraising platform that has gained popularity in recent years due to its mission to support free speech.

The page is currently receiving millions of visitors and is raising thousands of dollars per minute. In less than 48 hours, the new campaign has raised more than $5 Million. People around the world are donating money to support the group of truckers, as global awareness grows about about Canadian’s effort to push back against Justin Trudeau’s authoritarian efforts to quell descent and further divide Canadians.

Trudeau, whom is currently in hiding, has ordered Ottawa police to arrest anyone that offers materials support to participants of the Freedom Convoy, which arguably could even mean food.

Other Countries Are Joining The Freedom Convoy In Protest

As citizens around the world learn about the courage of these working-class citizens in Canada, many are starting to unite to push back against their own authoritarian governments. The people are uniting and making it clear that they’ve had enough of the dystopian nightmare that the world’s political leaders are creating.

A large demonstration in France against the vaccine mandates is currently taking place:

Thousands are uniting in Australia to push back against government overreach:

A group of French protesters have surrounded the Pfizer building:

In Belgium recently, farmers brought their tractors to create their own convoy:

In Italy, protesters push back against the authoritarian regime’s cruel mandates:

A simply, yet powerful photo amid the recent protests:

In Finland, a Freedom Convoy has come together, pushing back against mandates.

It’s fascinating to see the world slowly wake-up after the Coronavirus pandemic settles down and governments demonstrate that they’re unwilling to give back the power that was afforded to them during the pandemic. First, political leaders said it would take “two weeks to flatten the curve”. Now we’re well beyond two years and many government’s continue to increase restrictions and mandates, rather than permitting society to return to normal life.

News Media Chooses To Focus On The Few Haters

Above are a few cartoons that have become very popular in recent months.

The news media has done everything they can (examples here, here and here) to make these truck drivers look like they’re fringe, violent, selfish extremists. The Trudeau administration seems to be using the playbook from what happened in the United States recently, with the mainstream media labeling any freedom-loving American as dangerous and not-to-be-trusted.

On February 1st, Trudeau tried to smear the Freedom Convoy with the following Tweet:

Fortunately, many Canadians were awake to his intentions.

Most Canadians simply want an end to his authoritarian mandates and government overreach. Countless people blasted Trudeau’s poor attempt to divide the population:

The Prime Minister has also been playing games with financing media bailout’s in Canada, to the tune of $600 Million. Bailouts are littered with controversy, because the government essentially decides who wins and who loses. Whether you trust the government or not, incentives are incentives. News media funded by the government are more likely to curb criticism of government leaders. The only ethical action for media companies is to reject government funds.

Regardless of the games being played by politicians and the news media, these Canadian truckers have ample support, both in Canada and through-out the world. And their-ever growing group of supporters are common citizens, middle class workers, and people that simply want to return to their normal lives.

A Crypto Funding Platform Has Raised Over $400K USD For Truckers

Tallycoin, a decentralized cryptocurrency platform that uses Bitcoin for fundraising has raised more than 9 Bitcoins, which has an approximate value of $400,000. That’s quite an impressive number considering that this effort merges multiple technologies into one platform: crowdfunding, micro-finance, and peer-to-peer exchange over a decentralized network.

In recent years, cryptocurrency has become an authoritarian’s nightmare. Cryptocurrency gives power to everyday people. It takes power and control away from the financial industry and financial regulators. It permits the free-flow of money and exchange of value around the world.

And it’s growing in popularity.

Altogether, the Freedom Convoy is receiving support through various methods from around the globe. Just take a look at where donor contributions are coming from on GiveFundGo and Tallycoin – Venezuela, Peru, Japan, Russia, China, Mexico, France, Switzerland, Portugal, and more. It seems likely that citizens from every country in the world have donated to the truckers cause in some way.

While authoritarian regimes are trying to silence the cries of working-class families, people are finally taking a stand.

GoFundMe Has Taken Political Sides and It’s Destroying Them

GoFundMe cancelled the Freedom Convoy’s campaign, after they raised more than $10 Million. By supporting authoritarian and anti-democratic efforts, GoFundMe’s dirty games are finally coming to light. GoFundMe, often referred to as GoFraudMe now, is getting a lot of blow-back. Their decisions are very telling.

GoFundMe recently made the following statements:

“GoFundMe supports peaceful protests and we believe that was the intention of the Freedom Convoy 2022 fundraiser when it was first created.”

“We now have evidence from law enforcement that the previously peaceful demonstration has become an occupation, with police reports of violence and other unlawful activity.”

Occupation? Their chosen use of wording is fascinating. Isn’t this the same GoFundMe that previously permitted hundreds of campaigns for the Capitol Hill Occupied Protest not long ago? Yes, indeed it is.

GoFundMe supported Seattle’s lawless CHOP, or the Capitol Hill Occupied Protest, in which thousands of left-wing extremists took control of a part of the city of Seattle. Worse, GoFundMe even promoted CHOP’s “founding farmer”:

Here’s a post about the issue from Any Ngo, whom followed the Antifa’s 2020 violent riots closely:

GoFundMe is taking political sides and permitting their platform to act as a mechanism to support movements they agree with and to stifle movements they disagree with. This is tremendously common in Big Tech. And their choice has become evident in their recent statements.

At this point, even though GoFundMe supports left-wing farmers in occupied territory, it should come as no surprise that GoFundMe hasn’t supported any of the farmers involved with supporting the freedom convoy. At the end of the day, if the effort is to push back against authoritarianism, why is GoFundMe pushing back against working-class workers that simply want to live their lives?

Watch More On The Freedom Convoy

Just recently a video was posted showing that Trudeau has opted to send in a heavily armed riot squad to push back against the Freedom Convoy:

Around the same time, one of Trudeau’s personal security guards resigned. The video can be seen below:

Furthermore, farmers have joined the Freedom Convoy and are uniting to block the Canada – US border:

A hug session broke out today at the Freedom Convoy:

A good resource to see exactly what happening is the Podcaster Viva Frei #FreedomConvoy2022. Frei is a lawyer in Canada that often attends Freedom Convoy events and streams realtime video of his visits. He also conducts interviews and provides professional analysis of matters involving legal challenges, the protests and more. His videos and insights are fantastic.