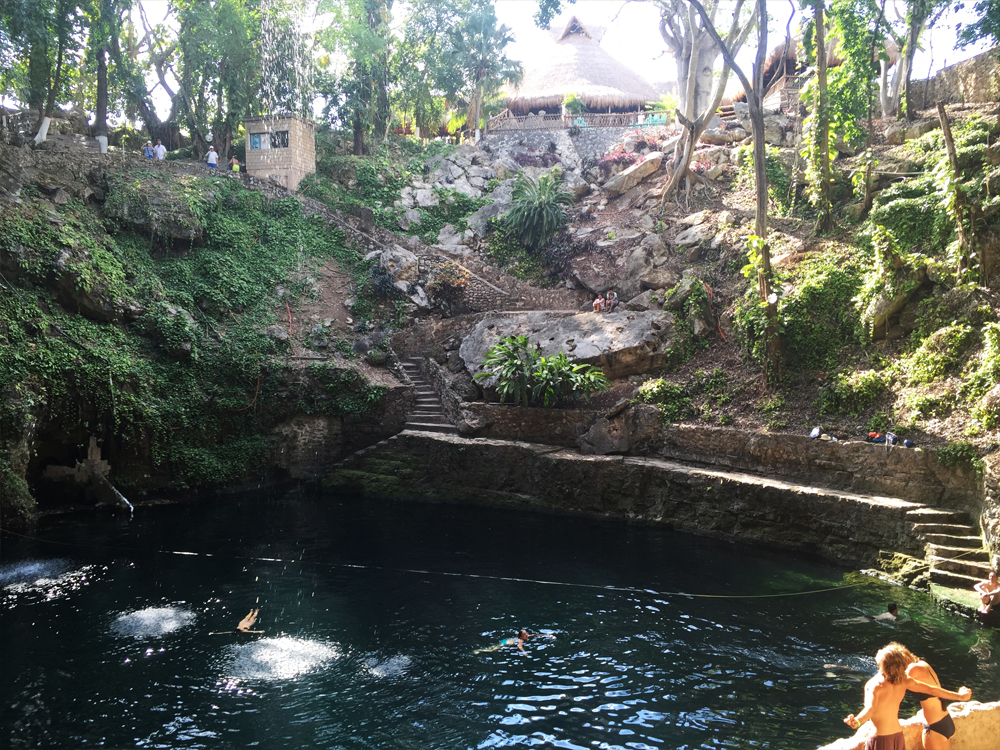 Took great pictures and a video of me jumping off a 40-50′ cliff (8-9 meters) into the water below. It was scary but very fun. The other guys, (Jonas from Germany and Brandon from Seattle, United States).

Stayed at Hostel La Candelaria. They had no dorms available listed online, but I decided to go visit anyway. They ended up having 2 beds available so I was still able to get one. I wanted to stay here because it had great reviews.

It’s funny, I was really tired when I arrived in Valladolid, but Brandon invited me to go to the Cenote (10 minute walk from the hostel) within only 1 hour of me being there. There was no way I was going to pass it up, so I joined Jonas and Brandon. They are both really cool guys. It was nice to meet an actual American that likes to travel because so many Americans don’t travel.

After that, we went out for some delicious Mexican food and had a group feast. We ordered a bunch of spiced meats, vegetables, torillas and Pina (pineapple) juice. It was delicious. A cute girl from France named “Merina” was sitting alone so I offered for her to join us instead of her sitting alone. She accepted and joined us. It was great because she spoke reasonably well in English. We laughed a lot and had a great time. After a while we left and Merina went her own way to meet friends. Sometimes it’s sad to see new friends go because you just barely started to get to know them.

After that, we went back to the hostel. I still hadn’t slept, so I was tired…but I wasn’t about to pass up fun with these guys. We all went back to the hostel and hung out. After meeting 4-5 more people, we decided to go to a couple bars in Valladolid. There were only about 3-4 bars since it was a small town. Two of the bars were closed, one was fairly empty (most people were eating), but the last bar was perfect because they were playing latin/electronic/european music and some people were having drinks. We all went there. I spoke for a while with a Brazilian man (can’t remember his name) who was also from the same hostel. He owned a flower/agriculture business in his family. It was nice to speak with him. His English was decent, enough to communicate.

Since English is typically the universal language for travelers, I am often able to help people learn English better. It feels good to be able to help people learn English and they are always very greatful. I am slowly improving in Spanish which is great, too. It is hard to learn because so many people speak English. The best incentive is when I meet interesting Mexican people, because they are willing to help me in exchange for me helping them with English. Cute girls that speak Spanish are a good motivator to learn 🙂

Anyway, we stayed out until about 1AM. Then we went back to the hostel, had a couple more beers, laughed a lot. I met couple more guys and really cute girls, one from Germany and one from Netherlands. I can’t help it, I seem to get crushes on these cute girls when I travel. Nothing serious but man they are so great and their accents make me fall in love almost instantly haha.

After some beers, good conversation and laughing, we went to bed and fell asleep quickly.

The bus for Chichen Itza is tomorrow at 8AM, but 5-6 hours of sleep is enough to catch up slightly.