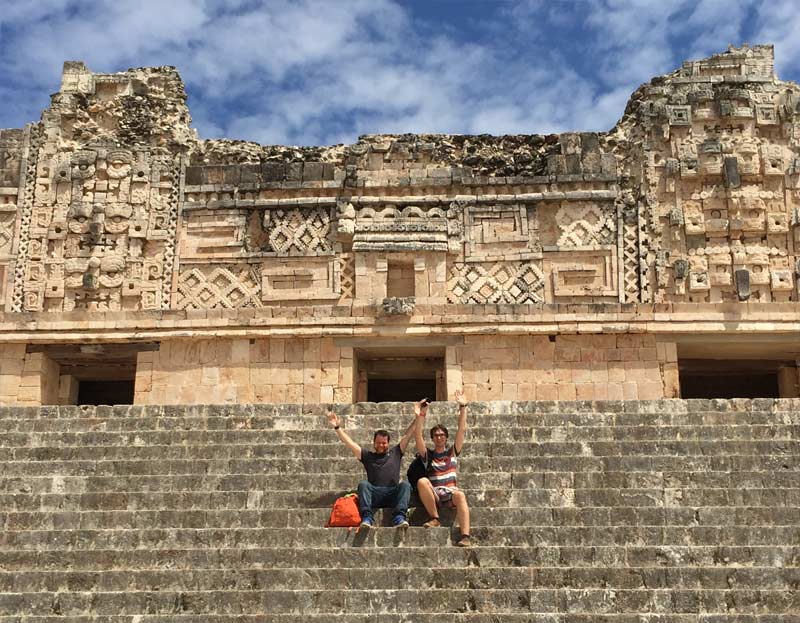 I went with the following people:

The bus ride from Merida was about 60 pesos ($3USD) and the entrance fee was about 220 pesos or $11USD. It was inexpensive, but I thought it would cost only $3-4, so the higher price was a little pricey. I always have to take into consideration my daily budget because if I spend a lot in on day I have to reduce my spending for the following day. I typically aim for spending $30/day and definitely don’t like going over $50/day. Staying at $20/day (USD) is relatively easy if I don’t go out an eat at restaurants.

Uxmal was great. I liked it more than Chichen Itza because you could climb some of the Mayan pyramids. It was incredible. There were 6-7 ruins we visited in about 1.5 hours. I took a lot of pictures which I will upload later.

Anyway, the bus ride was smooth. I was able to transfer some pictures off my phone to my laptop  because all of my batteries were well charged.

After we came back to Merida, we showered, spent time at the pool, drank some beers and then went to Coyote Maya. Mary (from France) didn’t come because she had to pack to leave for a popular island north of Cancun (I can’t remember the name). During dinner I had a really nice time speaking with Isabel (German, 18 years old) and Sonia (older lady in retirement, German, very nice). Sonia was great. We spoke for a long time and she told me her unbelievable story of how she met her husband. Essentially, she traveled with her friend and their two boyfriends (2 women, 2 men) to Canada. Eventually her friend and her boyfriend had to leave and go back to work. Sonia and her friends boyfriend continued to travel and traveled through the United States down into Mexico. Eventually their van broke down, so they got backpacks and continued their travels for a total of 13 months. During this time they fell in love and chose to marry and have 3 children when the returned to Germany. There was so much more to her life story, but it was nice to hear a great real life romance story that was successful. I truly hope to have similar happiness to what she has found.

Mary had to leave at 10:00pm and since I was out at dinner, I had to watch the time so I could give her a hug before she left. We connected and had great conversation. She wrote a list of fantastic French foods in my iPhone notepad because I am not as experienced with French foods. We laughed a lot together over the past couple days. I gave her one of my tubes of antibiotic ointment because bugs or flies had bitten her legs really bad and the pharmacy gave her the wrong medication. They gave her some Clomotrizole which is an oinment for fungus, not bug bites. I had 2 tubes, so she was grateful to receive one. She said I changed her perspectives of Americans for the positive which was really nice to hear. I gave her 2 big hugs, along with other travelers before she left and wrote a nice note in her travel diary. She collected peoples words and comments in her book while traveling so she could easily remember them and have a nice memory of speaking with them.

After Mary left, the rest of us went and bought cheap Mexican beer in Marida and brought it back to the Hostel. Sonia went to sleep, Isabel, Chris, Nathan (British) and myself stayed up talking for 2 more hours about language, politics and laughing quite a bit. Nathan was the first British person I’ve met, so it was nice to hear his comments about the English language and differences with American English. Eventually we spoke about World War 2, Christianity, Islam, Judaism, racism and other topics. It was very interesting to hear their perspectives. Eventually we all went to bed because it was getting late, we were all tired from traveling to Uxmal and others were sleeping so we didn’t want to bother them.

Mary will be missed, but we got some great pictures and she offered for me to visit her home in France after she returns from studying abroad in Chile. I hope to meet her again one day.