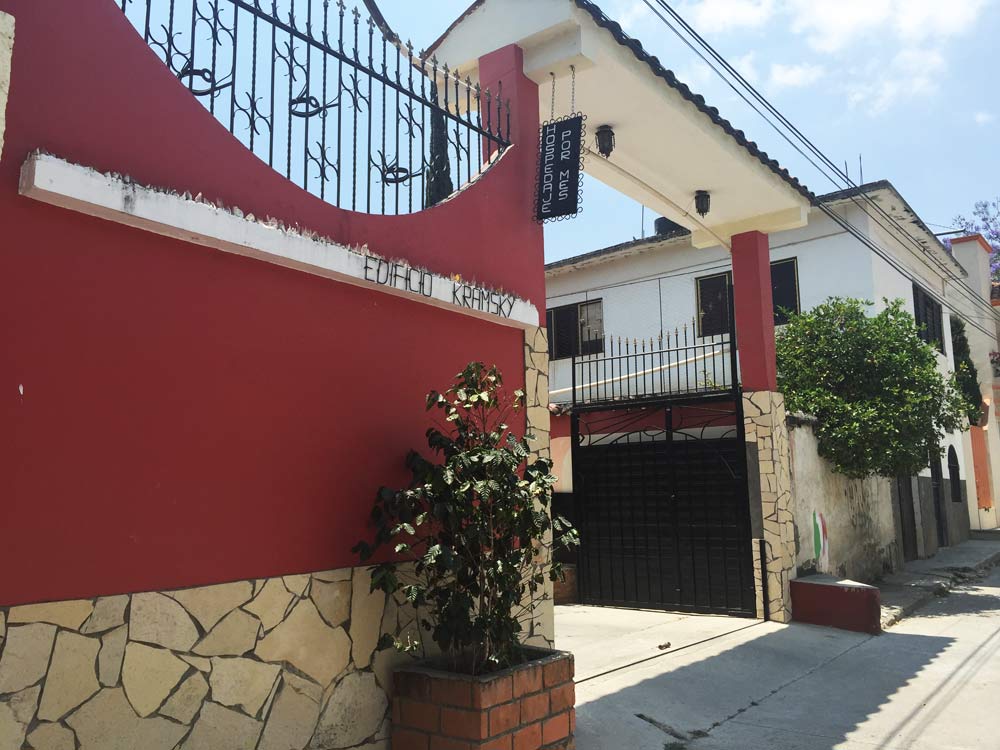 I slept in until about 9:00 this morning. After getting in last night and being up until about midnight, I was really tired from the 6 hours of Collectivo buses and carrying my bags around all day (even though I travel really light). When sleeping, it was a little warmer than I preferred before I went to sleep, but halfway through the night it got really chilly. I think that’s something that surprising to me about Mexico, especially southern Mexico. Although it’s really warm and sometimes hot, the nights can be really cold.

Chio went to lecture at the University in the morning. After she was done from teaching her first class, she came home and we made breakfast together. We had yogurt, apples, ham sandwiches with fresh vegetables (cucumber, tomato and onion) and some mayonnaise. I haven’t had mayonnaise in months, so it was really good. She drank tea and I had water. She bought a huge jug of water for us since, generally, the water isn’t the best and not always safe in Mexico. Typically I buy 1-2 bottles of water per day (about 10 pesos or $0.50USD each) unless it is offered for free at whichever hostel I’m staying at. However, last night and the next couple nights I will be staying at her apartment in Motozintla. View from her patio: 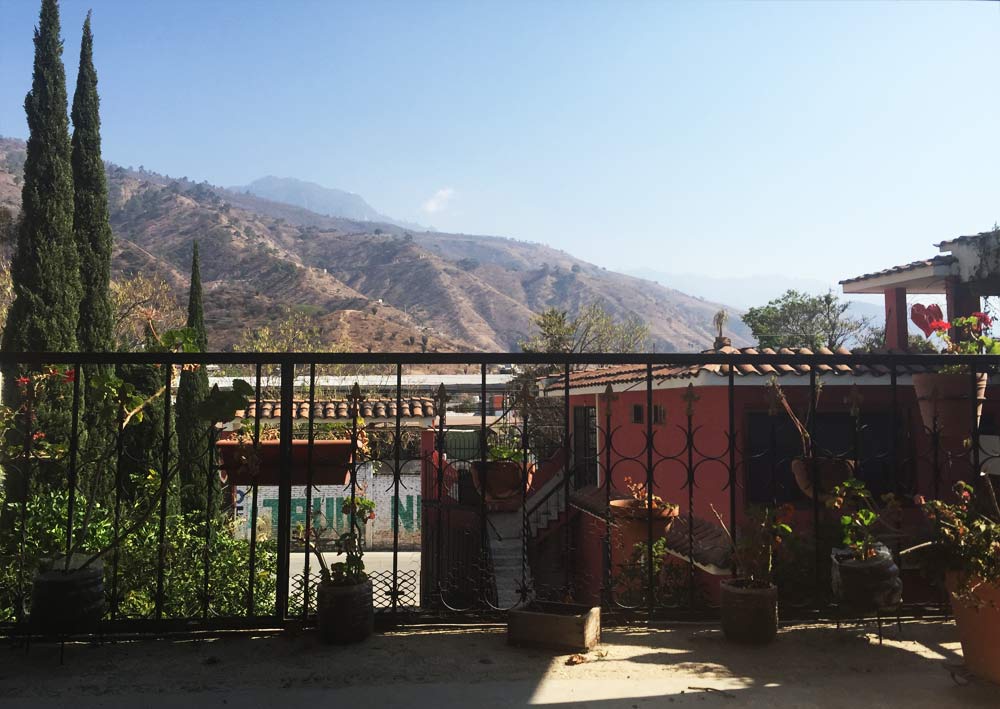 After breakfast, I asked her of the best way to do my laundry. Since we were in a small town in southern Mexico, I wasn’t sure if laundromats were even an option. She said that there are no laundromats and laundry had to be cleaned by hand. She said she has a woman that washes her clothes for her, but it would not likely get done quickly and I was essentially out of clean clothes (part of the struggle of traveling so lightly). So she showed me how to wash my laundry by hand on the rooftop where the clothes lines were and where the special sink was for doing laundry. It took a long time. She washed one shirt for me to show me how to do it. It was a good experience and I was somewhat embarrassed that I didn’t know the proper way to clean my clothes. I think she was embarrassed for me and unsure how it’s possible I went through life without washing my clothes by hand. In Mexico, that’s the way it’s usually done (I think) except in the larger cities maybe. But her sympathy helped. Good thing I’m charming. In the past, I’ve either used a laundromat or just washed things in the shower as I traveled. Anyway, washing my 8-9 most important clothing items took about 30 minutes. After that, I spent about a half hour with her while she had a phone conversation with her friend for 30 minutes. Then we left and got a cab to the University where she lectures.

Visiting the University was nice. I’m actually still here as I write this. It’s a very small campus with one main building, but it’s very well designed, a nice building and a beautiful property overall. 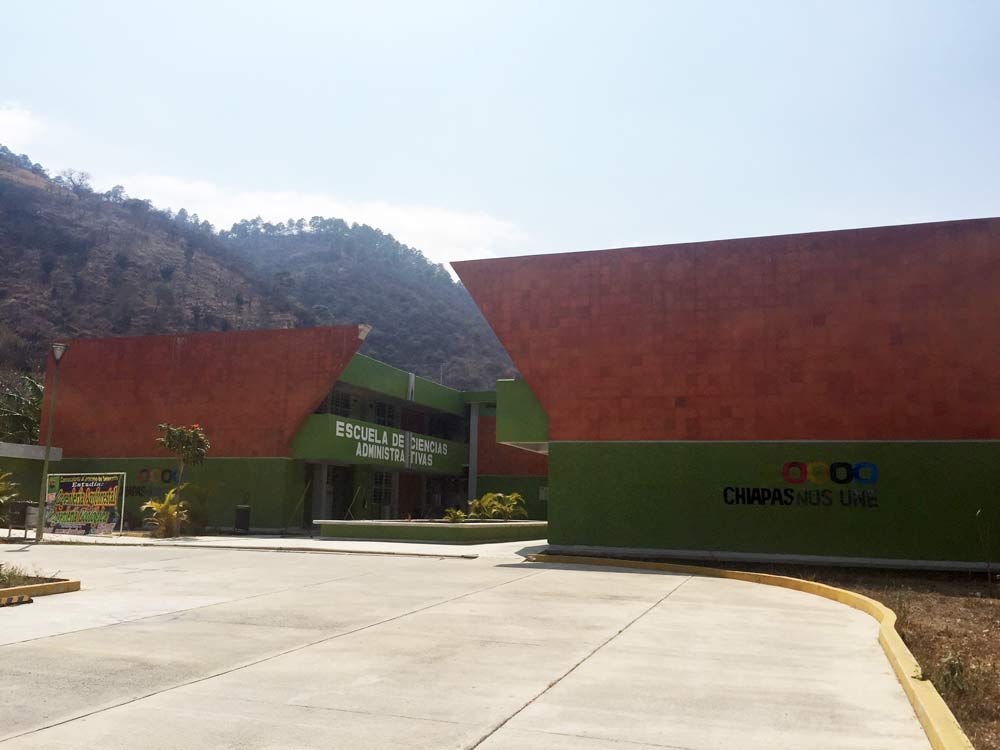 Shortly after arriving at the school Chio introduced me to her friend that taught English. We discussed a plan for tomorrow where I was going to help her teach her Spanish course. 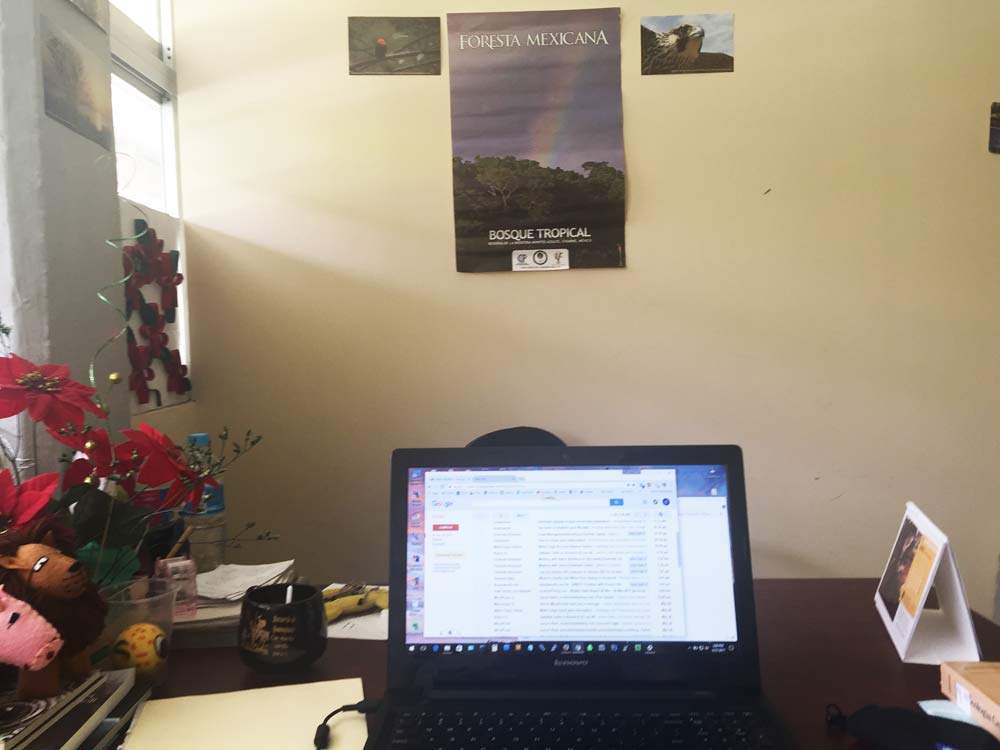 Chio was teaching for a few hours while I did computer work. She let me use her office and sit at her desk. Her office was small, clean and well organized. She had pictures on the wall of the forest, which aligns with her teaching ecology and biology. After a while I called my parents to catch up on what was happening. and took some pictures of the school buildings.

The bathrooms didn’t have toilet paper so I had to be resourceful and find some napkins in a nearby room. Lack of toilet tissue is common in different areas in central america. Additionally, since their plumbing pipes are bad, you often have to throw the tissue in a garbage bin in the stall instead of flushing it. After a while it doesn’t bother you, but at first it can be a little unusual.

After a while, she finished up her courses and we got a Colectivo back to her home. We hung out for a bit and then had dinner, which was delicious and provided by her apartment. In the cloth is tortillas, which comes with just about every meal. The drink is from Habiscus and is called Jamaica (pronounced with an “H”) tea. It’s really good. 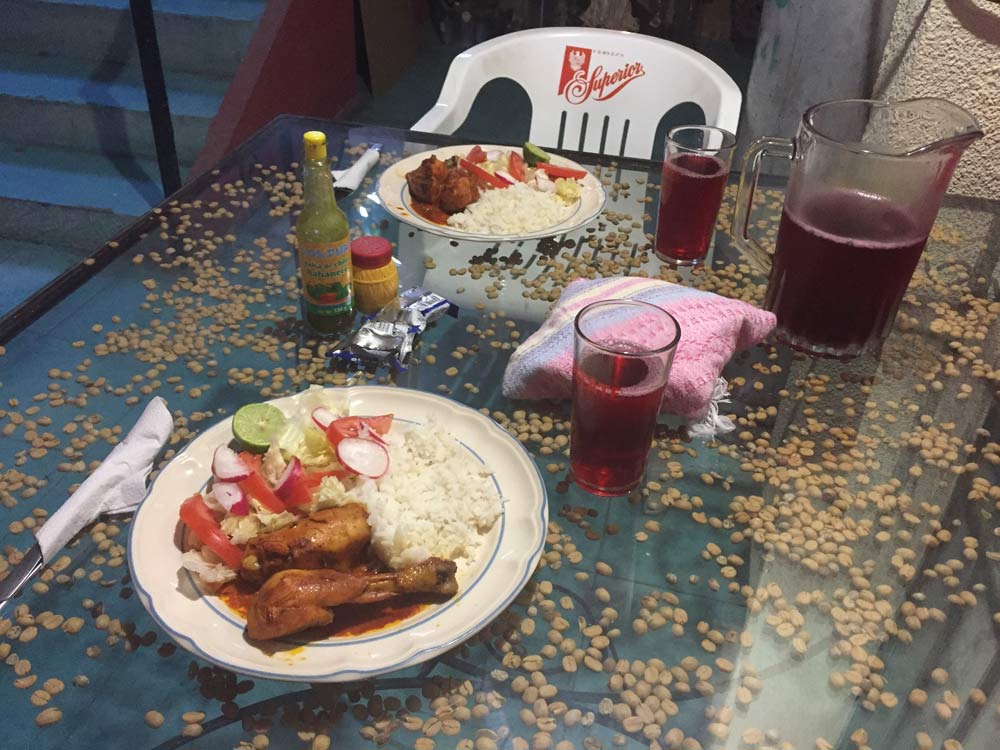 In the middle of the night I woke up and vomited. Rough. Clearly I’m sick. But I’ll get into that tomorrow.