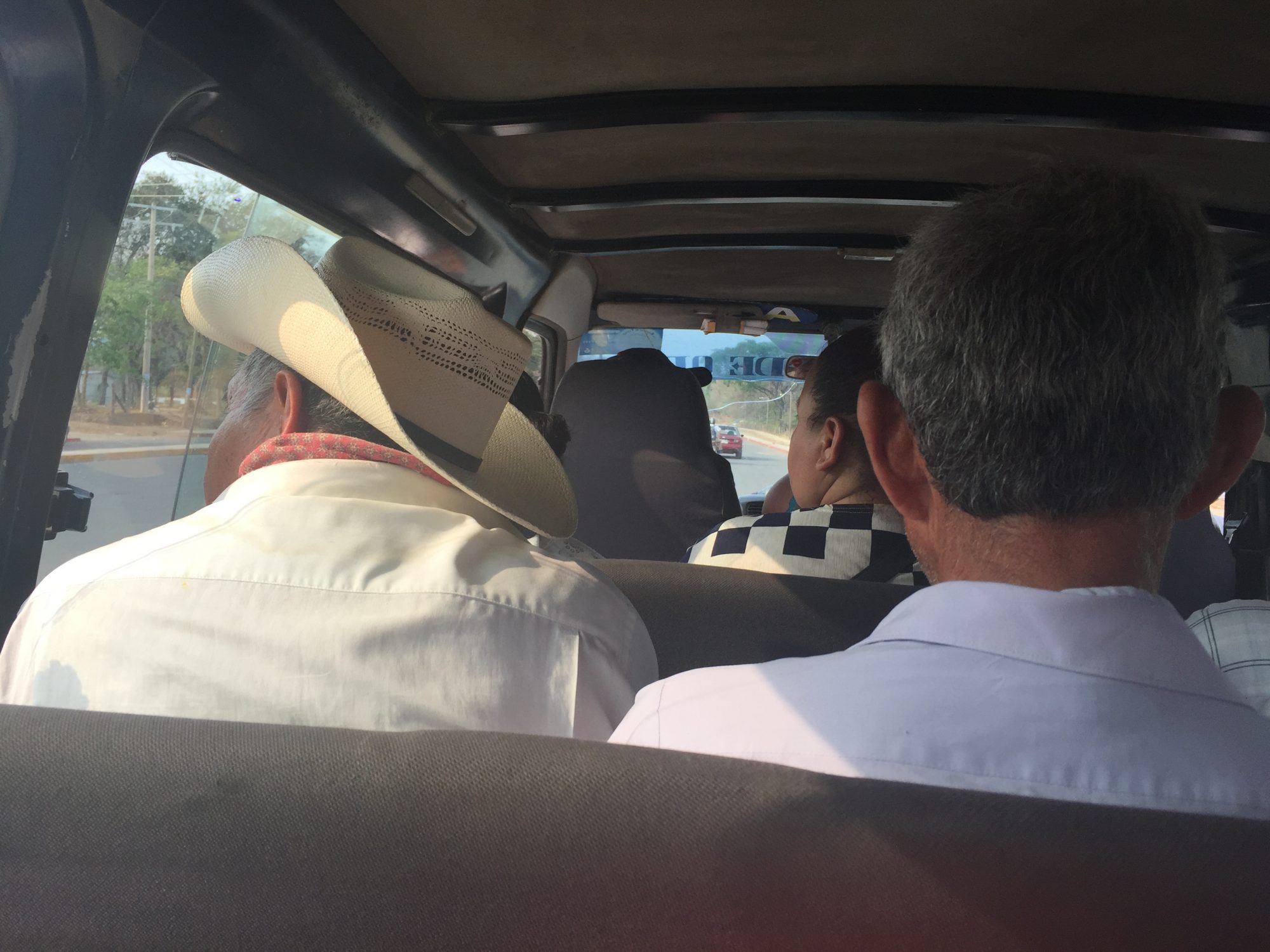 We left Motozinthla, Mexico at about 10AM after taking showers, eating the remaining snacks that Chio had and packing our bags.

For the day, we travelled for a total of about 8 hours, taking Colectivo’s (small community vans) and then taking Chicken Busses once we got to the border.

Stopped in Frontera, Mexico on the way, where we met Chio’s friend who was a doctor. She was really nice. Chio told her about my recent stomach issues (from Salmonella food poisoning) and she prescribed me a couple medications to strengthen and protect my stomach. My stomach has been significantly better, but the new drugs will help protect against future issues. Probiotics are very common in Central America among travelers and locals since the foods are strong, very acidic (Salsa and hot sauce with every meal) and there’s a lot of harmful bacteria. This is also why people eat a lot of packaged foods and bottled drinks. Local foods such as meat, vegetables, fruit and street food are delicious, but they bring potential risks. Sometimes street venders don’t maintain their cooking space well which can be

Anyway, Chios friend was really nice. I bought everyone lunch to show my appreciation. I had a Cheeseburger with french fries which was a nice change from all of the typical Mexican dishes I eat. After that, we left and hopped on another Colectivo to the boarder. We drove by many small towns that seem to be disconnected from the rest of the world, except for the times you see “Coca-Cola” signs.

We went over the border in La Mesilla. I didn’t have to pay anything as a border crossing fee to either Mexico or Guatemala. Apparently, some border crossings give travelers a hard time (possibly because corrupt border guards try to pinch extra cash out of travelers claiming there to be fees), but I had literally no difficulties and paid nothing. All I did was got my Passport stamped on both sides. The Mexican border guard was a little pissed off at me because I had my cell phone in my hand and cell phones aren’t to be used in government offices. I never used it and was merely holding it, but he didn’t like it. Anyway, Chio speaks Spanish and basically told the guy to relax because I didn’t speak Spanish. He stamped my passport, I said thank you in Spanish and left the building.

After leaving the Mexican immigration office, we had to catch a bus to the actual border. It was about 2 miles down the road. Once arriving, I was really surprised at how easy it was to cross. Like, I literally could have walked past the immigration office in Guatemala because it was off to the side of the main road and so many Mexicans and Guatemalans were coming and going. It sort of confused me.

Immediately upon crossing the border, I exchanged all of my Mexican Pesos to Guatemalan Quetzal’s. Guatemala is expensive. Instead of the exchange rate being 20:1 (for pesos), it’s only 7:1 for Quetzal’s. This means things are more than twice as expensive in Guatemala. Granted this is still cheaper than the USA (about 50% cheaper overall), but it hurts paying double what I’m use to. Something tells me my Guatemala trip will be short and I’ll be hurrying to Nicaragua where I hear it’s even cheaper than Mexico. Damn, I love traveling to cheap countries.

We took this chicken bus:

We decided to spend a night in a medium size town called Huehuetenango, Guatemala. It was unusual because neither Chio nor I had ever been here before. Then a couple more things happened…it started pouring out. We didn’t book a hotel because there’s no listings online (it’s off-the-grid essentially), which turned out the be a mistake. Apparently, some local high-school students were having a big event (like graduation or something) and every single hotel was booked full. There were no hostels because travelers don’t even know of this place. Ugg. So, after asking around, walking around town at night (which is dangerous in Guatemala) we finally decided to play it safe. We pulled an all nighter at a random pizza restaurant in Huehuetenango. It wasn’t fun, but it was safe and reasonably comfortable thanks to the friendly waitstaff. Plus, the bathrooms were nice and had plenty of toilet paper which is often a luxury in Central America.

I can’t say I recommend Huehuetenango to other travelers. There’s nothing bad about it but there’s also not much good about it. It’s sort of a boring town in the middle of nowhere. There are no hostels because travelers haven’t heard about it and there are no attractions to be interested in.

At one point, when I went to use the ATM in town, the ATM fee was $7 USD, not including my own banks ATM fees. That’s over $10 for one single withdrawl. No thanks. I declined and took my atm card back. I’m not paying that crap. Fortunately we had enough cash for food and traveling so we just skipped using the ATM. Plus, the banks looked sketchy and didn’t have locks on the doors.

An impressive building in Huehuetenango. I don’t know what it was:

The restaurant where we decided to spend the night together:

I’m exhausted and not particularly happy that we were stuck in this restaurant all night. It was an adventure, but one that I gladly would have passed on if we had a hotel to stay at:

After eating dinner, doing computer work, drinking a lot of coffee and sharing a pancake breakfast with Chio, we left the Pizza restaurant at about 7AM and headed to the Chicken Buses (cheap old school buses) and jumped on a bus to continue our trip on to Lake Atitlan, where we booked a private room at a Hostel called Casa De Filipe in San Pedro.

The night was very tiring. But we survived. We looked forward to the bus ride the next day where we slept a lot to catch up on sleep.