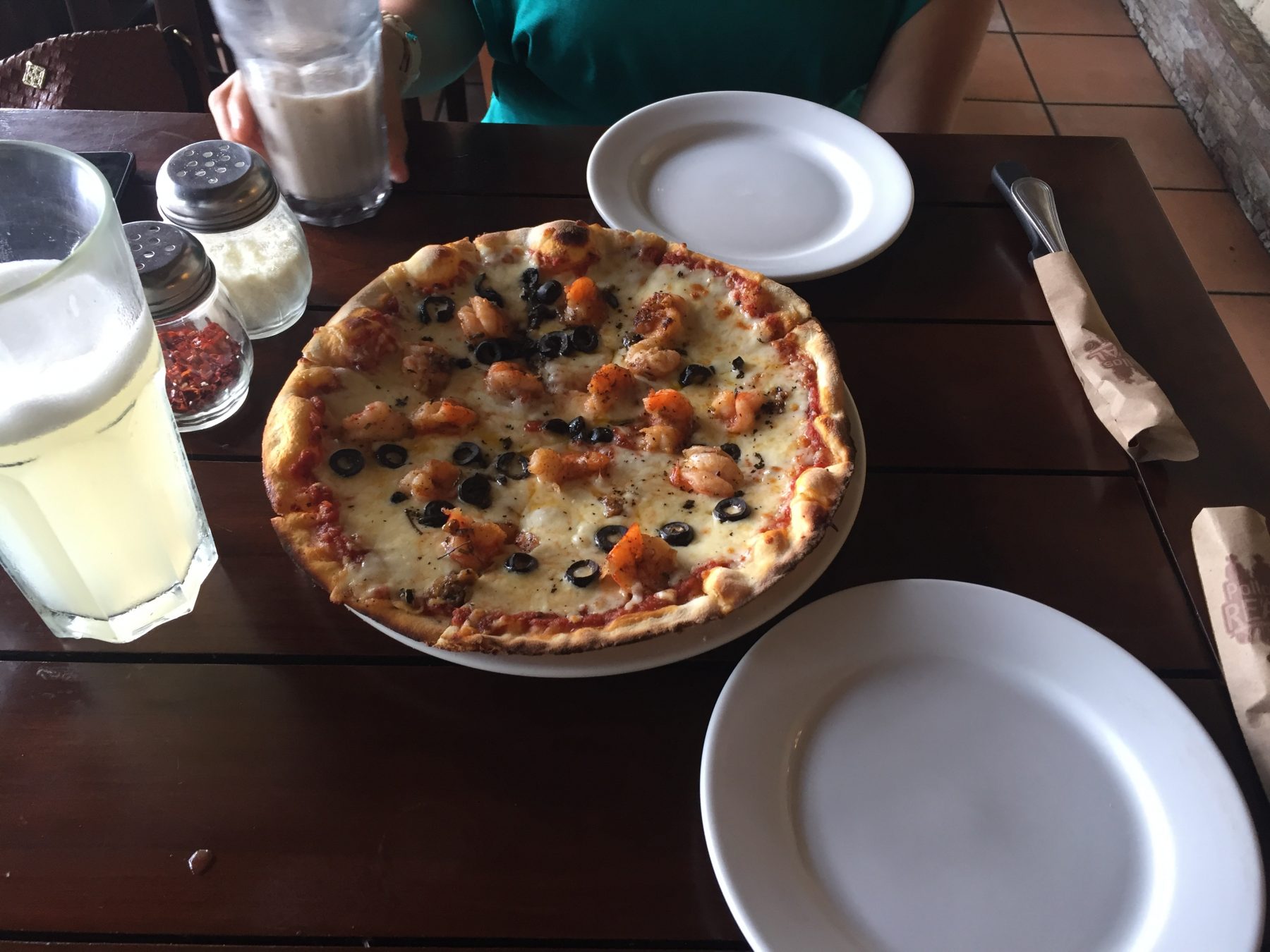 I went to a grocery store called “Super Selectos” and bought some things to eat. Mainly fruit and snacks. I try to eat as healthy as possible while traveling.

After talking a lot with Stephanie on WhatsApp over the past few days, we decided to meetup again. I wanted to meetup over the weekend, so when Stephanie offered lunch on Sunday, I was slightly hesitant…Sundays is for families. Lunch is for friends or grandparents. Stephanie laughed when I said “You’re offering to meet me when most people spend time with their grandmothers?” Nevertheless, we agreed to meetup for lunch. I was really hoping to see her again, so I was very glad to finally have the chance.

I should mention – WhatsApp is widely used in Central America, so much that the WhatsApp icon is shown on advertisements and billboards along with almost any phone number. In the USA, WhatsApp is almost unheard of. It’s very similar to texting. The only difference is that you open a different App interface. If you’re going to be backpacking for some time in other countries, its a good idea to install WhatsApp.

Meeting Stephanie for a second time

Stephanie took the bus from Ilopango, approximately an hour away on the bus, and she met me at my hotel. After she arrived, we walked for a bit, talked a lot and enjoyed our afternoon together. We went to a place called “Pollo Real” which is apparently a popular place here in El Salvador. Fortunately, it was also within walking distance from my hotel, so we walked for 5-10 minutes over there.

During lunch, we shared a medium shrimp Pizza. Stephanie introduced me to the El Salvador version of the drink “horchata”, which is different than horchata from Mexico. In Mexico horchata is made from rice. In El Salvador, horchata is made from morro, which has a stronger and more distinct flavor. It’s a light-brownish drink, served cold, often with ice. It’s like a mix of a light malted milk-chocolate shake with a touch of cinnamon. It was absolutely delicious.

After lunch, we went back to my hotel and watched the movie “It Follows”, which is an awesome horror film about invisible dead people that follow people. Check it out sometime – it’s a great movie.

Stephanie loves horror movies too. We had an incredible time and talked about a lot of things. She’s studying to be a veterinarian, which is rare in Latin America. After a few hours together, she had to catch the bus back to Ilopango where she lives with her family.

I’ll be honest, I’ve really started to like Stephanie. She has beautiful eyes, an adorable laugh, she’s educated, her sense of humor is the perfect mix of clever and sharp. She dresses well and walks with a certain elegance, while also being down-to-earth. During our time together today, we clicked well together again.

I knew that I was going to leave El Salvador tomorrow. The Tica Bus leaves at 5:00AM tomorrow morning. Part of me wanted to stay for more time in El Salvador, but I knew that my travel time was limited. I had just accepted a job offer in California and I had to make the most of my remaining time to travel. My mind was completely set on going to Nicaragua to go Volcano Boarding. However, part of me wanted to use my remaining time to continue spending time with Stephanie. I knew that was a bad option though, because Stephanie seemed rather busy with her thesis for her veterinarian degree.

We said goodbye and we both said we would keep writing to each other. She knew I was moving to California soon, but I told her I would come to visit her in El Salvador. That was certainly a big promise to make, but we had such an incredible time together that she somehow managed to take a piece of my heart (with or without realizing it).