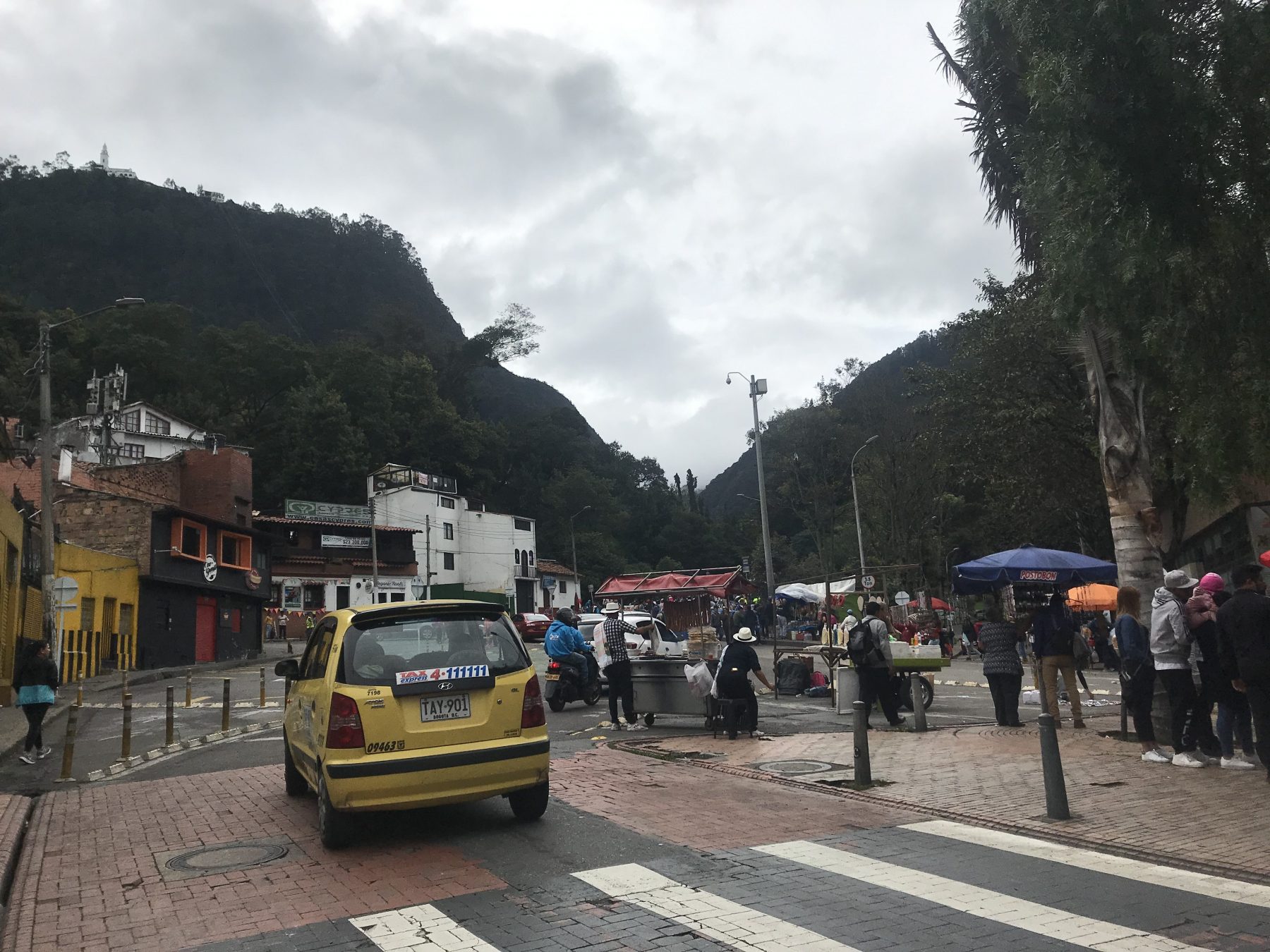 Living in El Salvador requires a lot of travel when I want to visit my parents in the United States. This means flights, and sometimes layovers. As you guessed it, I had a layover in Bogota, Colombia. It sounds strange…I had to fly for 3 hours south to Colombia from El Salvador in order to fly back north to the United States. Airlines are strange like that sometimes.

However, I was excited for the long layover. I was able to visit Bogota, Colombia for 12 hours (at no extra cost) just because of the layover. Sweeet!

When I arrived in Colombia, the first thing that I noticed is that I was freezing. Bogota is cold! That’s not what I expected from a South-American country. It reminded me of temperatures in the elevated city of San Cristobal in southern Mexico. Fortunately, I brought a backup rain jacket and put that on over a long-sleeve shirt. That worked perfectly.

The second thing I noticed, were signs for currency conversion. Oh no, I had to convert some US Dollars into Colombian Pesos. I’ve been spoiled in El Salvador – they use the US Dollar.

I was fortunate that the Airport had a “no-fee” currency conversion counter, called “Aerocambios”. I quickly converted about $60 worth of USD, and started searching for something to eat. Anything. I was hungry.

I had heard of Arepas, so it wasn’t long before I found Arepas in the many coffee shops near the airport. So, I bought some arepas. Honestly, these were my first ones and I didn’t like them very much. I knew I had to find more arepas elsewhere later in the day, because these beef/egg/cheese arepas didn’t hold up to expectations at all:

After eating, I was ready to venture off into the city. I didn’t really know what to do. I had 12 hours. I had done some minor research on Bogota while using the wifi on the flight, but I was still unsure.

I quickly decided on my plan for the day.

I had read about three main things to do: the Gold Museum, the area of La Candelaria, and climbing Mount Monserrat (a relatively small mountain).

So, I decided to walk part of the city to see what life was like, head towards Mount Monserrat and then swing back towards the city to go to Museo de Oro (the Gold Museum).

I got a taxi and headed into the city. The taxi cost about $5 and we drove for about 20 minutes. While driving, I observed the city. It’s very developed, much more than many areas of Central America. I took this random photo while we were driving, just to demonstrate how developed the city is…

I also noticed that the city is relatively empty considering it’s size. Where were all of the people? Eventually I learned that this day was actually a national holiday in Colombia. That made more sense as to why there weren’t many people around. Still it felt very empty, almost like the city was recovering from recent evacuation – it wasn’t, that was just my imagination speaking.

Once I exited the taxi, I started walking. Immediately I recognized Mount Monserrat. In the photo below, you can see it in the background. It was a cloudy day, which reduced the visibility in my photos.

I continued walking for a couple of hours toward the bottom of Mount Monseratte. I was hopeful that I could actually climb it, but it turns out that it was further away than it looked. But I was just happy to be exploring the city below the mountain.

I bought a yogurt snack along the way. Many street vendors were selling fresh fruit with cereal flakes on top of yogurt. I couldn’t resist:

While walking, I came across the moment called The Statue of Simon Bolivar. You can see the statute located inside the columns of the monument behind me. I didn’t realize it’s historical importance at the time. Later I discovered the historical importance – Simon Bolivar was the Venezuelan political leader that led the succession of South America from the Spanish Empire. It was incredible to learn that. I love history.

After walking towards Mount Monseratte for a while, I did a loop and headed back towards the city. I photographed a lot of little stores and shops because I like to document the day-to-day life occasionally during my travels. Here are some of the little stores I came across:

I was ready to eat something, so I hunted down some more Arepas. I wanted to like them, because I had heard so much about them but I didn’t like the first ones I had. So I gave it another chance.

These ones were delicious:

I was super happy with my second round of arepas. I wrote more about them in my other article: What are Arepas from Colombia like?

After the arepas, I was running low on time. I walked quickly to get to the Museum of Gold. I found it. However, I was disappointed to discover that it was closed. Given that it was a holiday weekend, they were closed for the festivities. Bummer!

I wasn’t going to have much time to enjoy the Museum anyway, so perhaps it’s best saved for another trip.

Overall, I had a good experience. There’s so much more to do that I didn’t have the chance to experience. I wish I had two or three days. I’ll admit that it wasn’t really a Top 10 place, especially since the people seemed less friendly than other places I’ve visited, but I had such limited time there that it’s not fair for me to use that as a factor in my opinion.

Maybe someday I’ll have the chance to spend more time in Bogota.