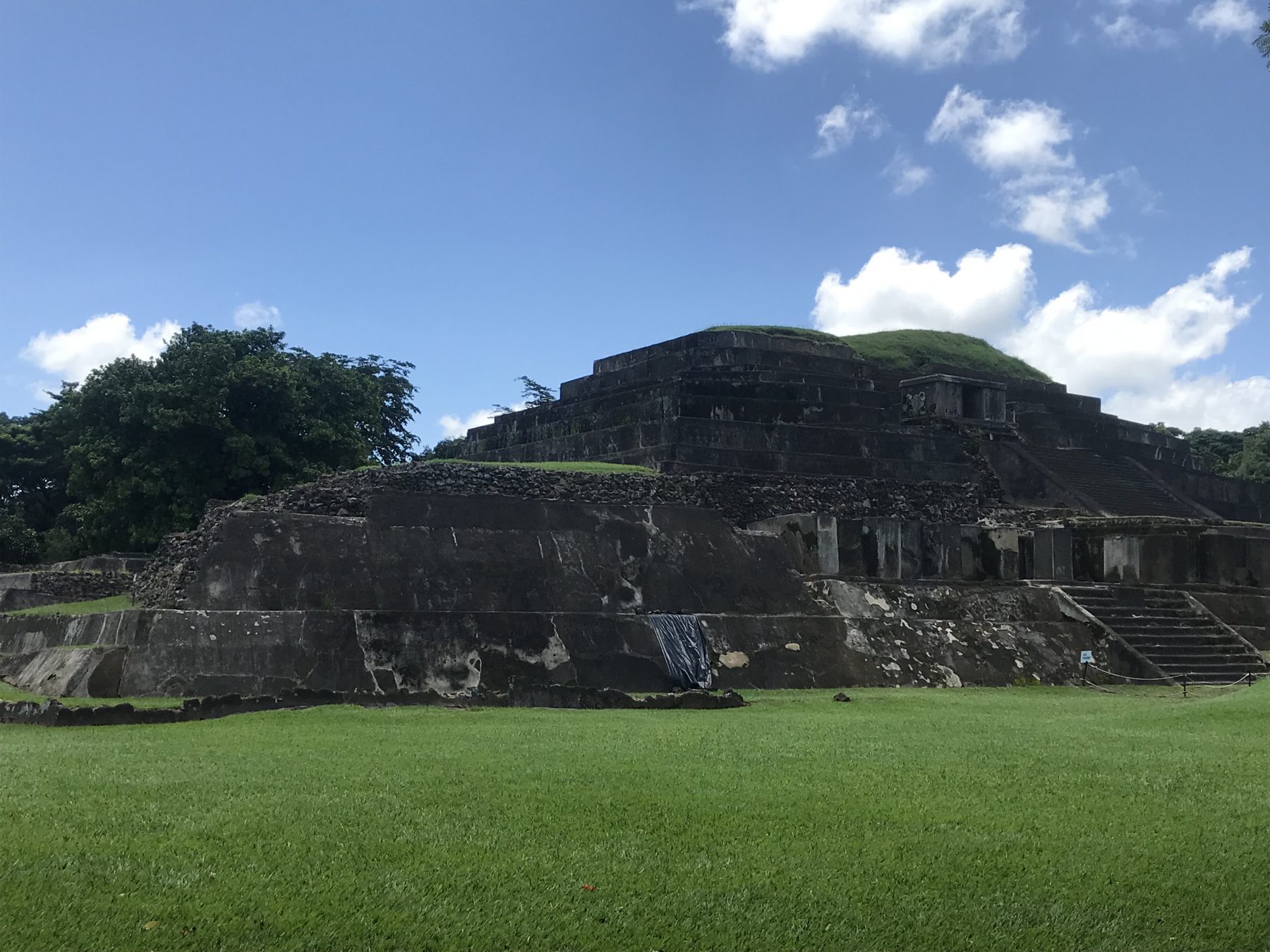 Today I visited the Tazumal Ruins of El Savaldor. They’re located near the city of Santa Ana, which is a beautiful and popular city to the west of San Salvador. I drove with my girlfriend Stephanie and some of her family members to the ruin site and we spent about two hours exploring everything (the ruins and the visitors center).

The Tazumal site is known to be the most built up and well preserved ancient Mayan ruin site of El Salvador. The ruins were beautiful and quite impressive and the mini-museum on site was very well organized and interesting. At the site, there was really only one structure – a central pyramid on a raised platform that goes approximately 20 steps high. It’s like two pyramids on one platform.

From San Salvador, the drive was just under an hour, probably about 50 minutes. It’s an easy drive, with a long well-paved highway. And the area of the ruins is relatively safe, although I don’t know the area well enough to suggest venturing off of the main street that the ruins is found.

The Mayan temples of Mexico (specifically Chichen Itza and Uxmal) seemed a little more substantial than the ruins I’ve visited here in El Salvador, but it was still fantastic to see. From my understanding, the ruins here in El Salvador were actually built by nomads that left the more-northern regions of Central Mexico and Guatemala. So it appears that the mayan influences of El Salvador are an extension of those up north and west.

Behind the scene of the ruins was a walking trail through the woods. It was beautiful. On the other side of the fence, parallel to the trail we were walking, we could see a cemetery.

The colors of the flowers and the various shapes of the headstones were beautiful. It looked as if the cemetery was rather crowded, with the grave headstones placed practically on top of each other. So I image it’s a lower-class cemetery. I’ve seen other cemeteries here in El Salvador, and the headstones were further spread out and spacious.

Outside of the entrance to the ruins, is inevitably some shops and local street venders. I bought a jade necklace for Stephanie, which is in the shape of a dog (she is a veterinarian). I also purchased some local coffee, called Cafe Tazumal. I’m saving that as a gift for when I return to the United States for a two back-to-back weddings I’ll be attending.

After we visited the ruins, we had lunch at a nearby restaurant. Honestly, the restaurant was more like a persons humble home that they called a restaurant, but it was a comfortable atmosphere and the food was fantastic. The cultural food was very good and fresh, and the family that welcomed us was very kind. We were very grateful.

After that, we dropped off her family in Apopa and returned home. Santa Ana is a great little city. We’re looking forward to exploring it more in the future.