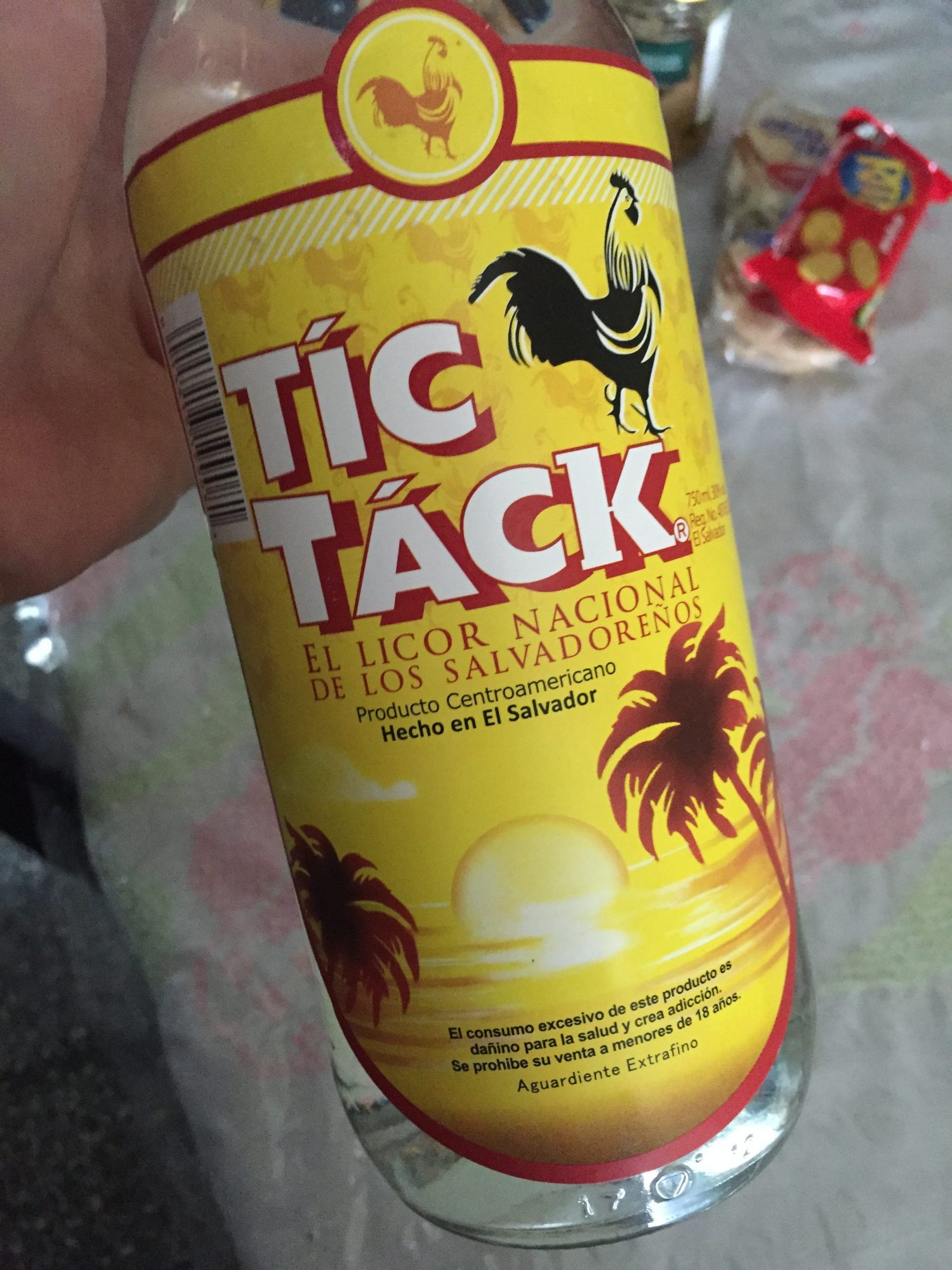 The national liquor of El Salvador is called Tic Tac, or “Tic Tack”, depending on where you read about it.

Supposedly it’s not the official “national” liquor of El Salvador. It seems they don’t really have an “official” national liquor, in the way they have an official national flower (the Izote flower) which is a national symbol according to the government here. However, Tic Tack is the closest thing to the national liquor because it seems to be generally accepted as such and they wrote it on the label.

Tic Tack is not smooth. It hurts.

Tic Tack is not far from grain alcohol..that is…unrefined, hard on the throat and stomach, and it can be mixed with anything. And mix it you should…because drinking it alone is like drinking fire.

I bought some to try it out. I saw it in a local grocery store and it stuck out to me. National liquor of El Salvador? I didn’t know there was one. Being a lush, I love to try new liquors. My Salvadoran girlfriend had never heard of it. Her mother had heard of it many years ago, but she didn’t like it. And I see why.

The bottle designers should remove the palm trees from the label because it’s anything but relaxing. In fact, it’s downright brutal. It’s like a strong vodka.

The Nation Liquor of El Salvador Is Ill Advised To Try

It’s a crude distilled sugarcane liquor. It’s actually quite overwhelming and ill advised to try. I think the company that makes it gave it the “National” label just to raise the price a little bit. Surely nobody in this country actually enjoys drinking it.

And that’s an interesting point. I’ve never seen the bottle at a bar before, I’ve never seen anyone buy it and nobody has mentioned it. So, I’m going to guess that it’s an old liquor that was once drank, possibly during the Salvadoran Civil War of the 1980’s and maybe fell off the bandwagon since then.

In fact, it’s very similar to this other crap…Caña Rica.

This stuff is the lowest it get’s. I’m pretty sure it’s grain alcohol. That’s probably why they show fields of grain on the bottle. It’s cheap and gross. I’m sure only alcoholics drink it. Maybe college students drink it too because it’s so cheap. Each bottle is only like $2.

Anyway, if you ever have the chance to try Tic Tack, I don’t suggest it. The National Liquor of El Salvador is certainly nothing impressive. Drink a good beer or whip together a tasty mixed drink with other ingredients…just don’t drink this stuff straight or you will regret it.