The Complete Story of Andy Lovos in El Salvador 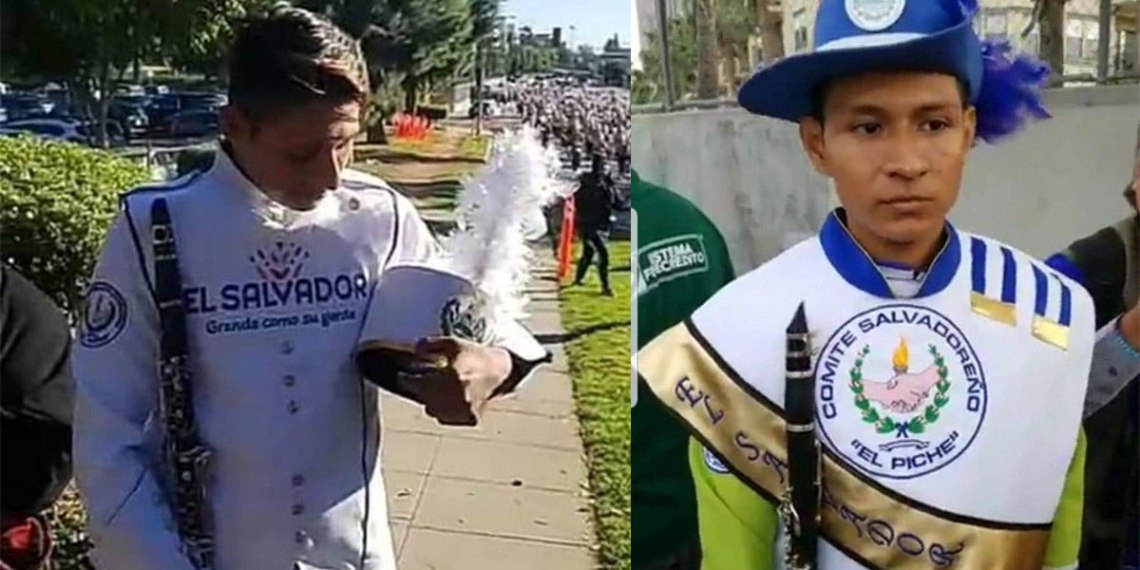 The story of Andy Lovos is a very recent story that has evolved over the past week here in El Salvador. For those new to this website, I moved to El Salvador from the United States in 2018 to live with my girlfriend whom is from El Salvador. I only heard about Andy’s story when my girlfriend point out the story on a local television network. My girlfriend and I discussed the story together and shared frustration and disappointment for the unfolding events.

Andy’s story is an important story that speaks of the challenges the community of El Salvador as a whole faces together. It also shows the significant courage, unity and emotional strength that the people of El Salvador have.

For a good outline of the details of the story, visit the following page in Google Chrome and translate in English:

Some background story about Andy Lovos

Andy Lovos is a young man, a clarinet musician from El Salvador. He was a member of a band that represented El Salvador at various international events, in an organization called “El Salvador, Grande Como su Gente” which translates to “El Salvador, Great As Our People” in english.

The organization receives financial support from various sources, primarily large donors and federal governments such as the government of El Salvador. The organization also has a significant number of volunteers, more than 2,500 according to its website.

An overview of the timeline and circumstances

Andy Lovos rehearsed with the rest of the band throughout the year to prepare for the “Desfile de Las Rosas” or “Rose Parade” in Pasadena, California. For those who don’t know, the Rose Parade is an annual celebration that has more than 100 countries in attendance to play music from their respective countries. It’s a festive event with floats, bands and beautiful apparel. It’s an all-day event. Andy, along with his friends practiced rigorously for months to prepare for the event.

In November (2019), the government of El Salvador gave El Piche $140,000 to pay for the flights to send the band to California for the event. This happened after the trip was nearly cancelled due to inadequate funding for the 250 band and project members. It averages to $560 per person, slightly more than the cost of a typical flight, which is usually about $450 to $500 round trip to Los Angeles (a 6 hour flight that I have done many times).

In addition to the funding from the government, the event organizers asked for $500 from each band member, which was unattainable for some of the members, including Andy. By comparison, $500 is approximately one months salary in El Salvador, for a middle class skilled labor job. It’s a big cost to a family, no less one musician. The demand for $500 was denounced by Andy, who said he did not have funds to pay the cost.

Andy went to social media before the event and announced that he would not be able to participate in the event and expressing frustration for the organizers. Eventually, his facebook posts reached far, specifically to Salvadorans residing in California, whom initiated pressure for support. Eventually, Andy was given a ticket from the Salvadoran Consulate in California after a group called Nuevos Ideas raised the money.

Apparently, it was not publicised that the event organizers would collect $500 per band member. It’s hard to know if it was something that was kept from the public’s eye, or if it was just not talked about non-intentionally. Other band members struggled to pay the $500 too, but eventually they travelled…so it’s unclear if it was well known that the money was required and it was unknown how the tickets of the other band members were paid for.

Then, the worst happened. The police came and took Andy out of the event “for not being part of the band”. It was bizarre and confusing.

More abuses of power and lacking responsibility in El Salvador

It’s no wonder the people of El Salvador don’t trust leaders here. Apparently, in an abuse of power and low-level maturity, in order to make Andy pay for publishing his previous comments on social media (and maybe other undisclosed reasons), the management team quietly called the Pasadena Sherif’s department and stated that “Andy was not to be part of the event“. In response, the Pasadena police followed orders and essentially detained him on the street not far from the location of the Parade, within hearing distance.

When I first learned that this is what happened, I was shocked. How low does a person have to go in order to feel superior over another person?? However, I know that these shitty intimidation tactics are common in El Salvador for the megalomaniacs here in El Salvador.

Also, I questioned if this situation was partially the fault of the police in Pasadena, because clearly Andy was dressed and prepared as the rest of the band was. I wondered if they investigated the situation. But maybe they didn’t have time to investigate the entire situation. And the more I thought about it, I realized that the police were just doing what they though was best according to the orders of the organization’s management team.n

After all, the police have no idea about who’s permitted to be in the event. They are not event organizers. Therefore, 100% of the responsibility goes on the management team.

It get’s bigger…news travels back to El Salvador

Once the mayor of the department/state where Andy lives discovered the news, he expressed his solidarity with Andy and demanded a response from the bands management team on Twitter:

My solidarity and support for Andy Lovo and his family, a young Migueleño with a lot of talent and dreams.
I demand from the Committee ElPiche, an official position to clarify this humiliation to a young Migueleño.

Then, Héctor Castillo, a member of the group (I’m unclear about his position in the organization), said that the reason he was excluded from the band was due to “medical records that were not submitted”. At the moment that I’m writing this, that was the only “official” response from the organization. The official statement only says that Castillo is a member of the band…so, if that’s true, why wasn’t there an official response from the managers of the organization? Where are the managers? This was handled poorly. It was shameful and disappointing. With a complete lack of responsibility to the situation, they rely on an embarrassing and lame excuse in order to cover their tracks and distance themselves.

Unfortunately for the organization, the public is not stupid. The public knew this was a publicity stunt to save face. In fact, it created only more outrage. And the people were right, this was a shadowy abuse of power, including in the face of the support of the country’s president.

In their frustration, the citizens went to social media, sharing the story on Facebook and Twitter and reaching out to the President directly, knowing that he uses Twitter frequently to speak to the population.

The hammer comes down

Upon reading the story of what happened in Pasadena, President Nayib Bukele of the entire country of El Salvador took immediate action. In his quick and methodical response (and probably with furious sentiment), he stated that the organization of Enot Rubio will no longer receive funding from the government:

“The organizers of the Band ‘El Salvador, great as its people’ will not receive a single cent of the Government and I am sure that, neither of the decent private company. The sustainability of the band will become impossible and the artistic future of hundreds of talented young people is at risk”

That was big. He dropped all funding and recommended that all decent private donors drop funding too…essentially a death sentence for the organization’s chapter in El Salvador. Brutal, but well deserved. Bravo. Abuses of power are exactly why this country has struggled year after year and the President made it clear that he will not tolerate it.

Furthermore, President Bukele immediately ordered that a new band be created, operated and supported by the national government. He said:

“We invite all the young people who currently make up the band directed by Enot Rubio, to sign up for the new band. El Salvador is a big country, by its people. We are not going to let anyone stain that”

I support the actions of the president. I have a lot of respect for how he’s handled things. If you don’t know, Nayib Bukele is the underdog-independent presidential candidate that won by a landslide against the scandalous democrats and republican politicians here. And thank god for that.

In the USA, we have law and order and have a general trust for local community leaders. Taking responsibility is important. In El Salvador, things often work differently, where responsibility is often seen as an unnecessary annoyance. In this story, this community leader and his cohorts tried to secretly abuse their power and extend that abuse into the United States… idiots. Brilliant thinkers over there at ElPinche. In the United States, even the smallest scandals become news. The police in the United States are not like the police in El Salvador. They forgot that apparently. These megalomaniacs, that shield themselves with non-profits, in their stupidity set up an international scandal without realizing it.

El Salvador has suffered for too long from nonsensical abuses of power and corruption. Those who lack responsibility and use unethical forces of power against the hard working people of El Salvador deserve justice. No more games. And the President knows that.

The story of Andy Lovos is symbolic, which makes the story larger than it seems.

Andy, a hardworking and committed musician did everything that he was suppose to do. He practiced, he attended sessions with the other members of the band, he was committed to his country and he volunteered to represent his country in the best possible way he was able. His only shortcoming was that he wasn’t able to pay the extra money to attend the event in the United States, money that he should not have been expected to pay in the first place. This is a national band of volunteers…why are volunteers being asked for money? They already donate months and sometimes years of their time. If money is short, which it almost always inevitably is, the burden should not be placed on the backs of the volunteers, and if it is, at least a solution should be offered by the leaders that will provide for all of the volunteers…or else, hire less volunteers! I understand that it’s complicated. Anyway, when Andy was gifted the plane ticket, he was confronted with corruption and unfair treatment by the organizers of the band. Ugg.

This tragedy is a small, but telling. It shares the story of struggle and the challenges that confront people here. This is only a momentary glimpse into the injustices that take place here. These things happen everyday here but go unnoticed. Those with power often aim to silence others. They abuse their positions. And people in poverty do not have many options to escape the various forms of abuse.

To me, this breaks my heart because I’ve never seen so many bright spirits be dimmed by things like this. Living here for more than a year has opened my eyes in many regards. It’s not just a news story from a distant country. These are things happening to the people in communities near me.

The people of El Salvador are strong and they will continue to overcome things like this as they make progress and hold megalomaniac’s responsible for their evil and unforgivable offenses.