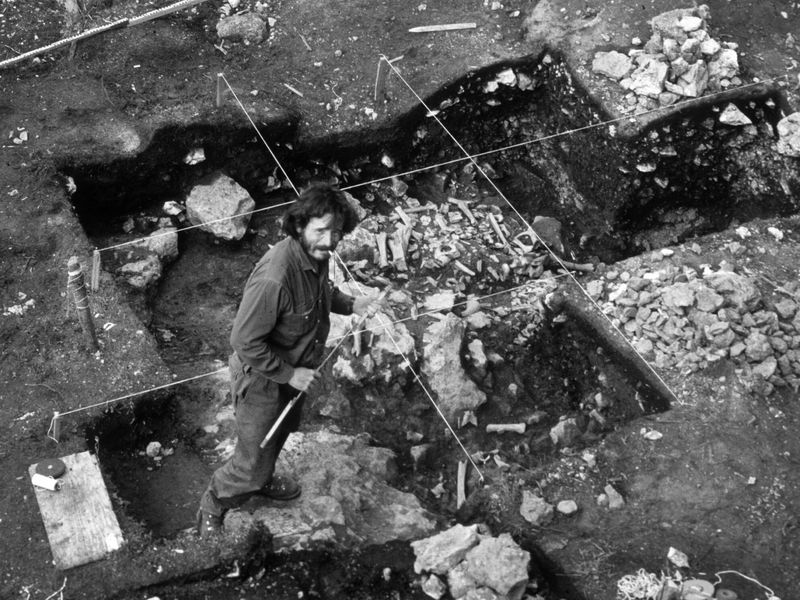 French-Canadian archaeologist Jacques Cinq-Mars has been searching for dig sites and caves in Canada’s Yukon territory since as far back as the 1970’s. He primarily focussed his research on debunking the belief among scientists that civilization existed in the Americas more than 13,500 years ago, before the “Clovis People”.

The Clovis People still lack a formal name, so scientists identify them using the same word as the Clovis spear, a large spearhead that was discovered in 1929 in New Mexico. Samples of the Clovis spear have been found in many places across the United States and as far south as Venezuela. Clovis people is a general term that identifies the initial nomad hunter-gathers that came to the Americas.

Many scientists believed for decades that approximately 13,500 years ago was the first time that humans cross over the Bering Strait from Russia to Alaska, on a now submerged strip of land called Beringia. This belief, and lack of evidence to prove otherwise, lead to the creation of “Clovis Culture”, which has had a long-standing grasp on archaeological belief regarding human migration to the Americas.

To say otherwise was to be scrutinized or ignored by other scientists. Between 1979 and 2001, Jacques Cinq-Mars published pieces arguing against this mainstream theory. Scientists just ignored his claims, that is, when it wasn’t stirring fierce opposition and bitter debate. Sadly, his funding dried up and he had to give up his archaeological field work.

In 2017, Jacques Cinq-Mars was proven right. Hakai Magazine published an article explaining the details. Essentially, a piece of a horse jawbone was discovered in the Bluefish Caves of Yukon that dated back 10,000 years before humans were originally thought to have been in the region. Radiocarbon dating proved the timeline. The final victory came when the horse’s jaw-bone was discovered to have very distinct tool-made scratches on it, which were closely analyzed and confirmed by Lauriane Bourgeon.

This evidence suggests that humans lived in the Americas more than 24,000 years ago.

The Smithsonian published an article with the subtitle “The story of Jacques Cinq-Mars and the Bluefish Caves shows how toxic atmosphere can poison scientific progress”. That article was an atomic bomb, often identified as validating the feelings that many scientists have regarding biases in their field. The Smithsonian asked:

“Did archaeologists in the mainstream marginalize dissenting voices on this key issue? And if so, what was the impact on North American archaeology? Did the intense criticism of pre-Clovis sites produce a chilling effect, stifling new ideas and hobbling the search for early sites?”

Some archaeologists answer yes. For 35 years, Jacques Cinq-Mars searched for answers to validate his assumptions and only now is his findings being valued by the archaeological community.

Artifacts In Chile Opened The Floodgates

Now, 20 years later, a team from the University of Montreal has continued researching the Bluefish Caves of Jacques Cinq-Mars. And they’re finding even more evidence. Tools, bones and knives dating back 24,000 years have been excavated in the area.

And every time new artifacts are found, that’s a huge win for science.

Science Is An Ever Changing Field

The Scientific Method is about challenging assumptions, gathering data and proving (or disproving) theories. Widely accepted theories are sometimes disproven, as with the case of the Clovis people. It’s important for the scientific method to work properly, for curious scientists to share their theories without scrutiny or hostility.

All science-related subjects can be victim to the influences of by politics and money. Like anything, science gets influenced, even corrupted, when money is involved. There’s a race amongst research organizations to achieve notoriety, recognition, larger budgets and bragging rights. And that creates a reinforcing loop, one that rewards those with the biggest budgets and stifles those with less clout that may have found important breakthroughs.

Receiving grant money is big business. And the trickle-down effect of that significant. Scientists often don’t get the funding they need and the rest of us miss-out on a lot of the excitement that those scientists could uncover for us.

It’s widely known that a research scientist could have his or her funding and livelihood threatened if unwilling to follow the narrative of those controlling the funds. Those scientist’s careers peter out and we all miss out. Investigating scientific pursuits takes time, manpower, tools and resources. In other words, it’s costly. And those whom control the grants for scientific research often have interests of their own.

In the case with Jacques Cinq-Mars, he faced scrutiny for believing that humans lived in the Americas before the Clovis people. Fortunately, he’s now been vindicated while he’s still alive.