Holger Hagenbusch – A Disturbing Murder and Exposed Coverup in Mexico 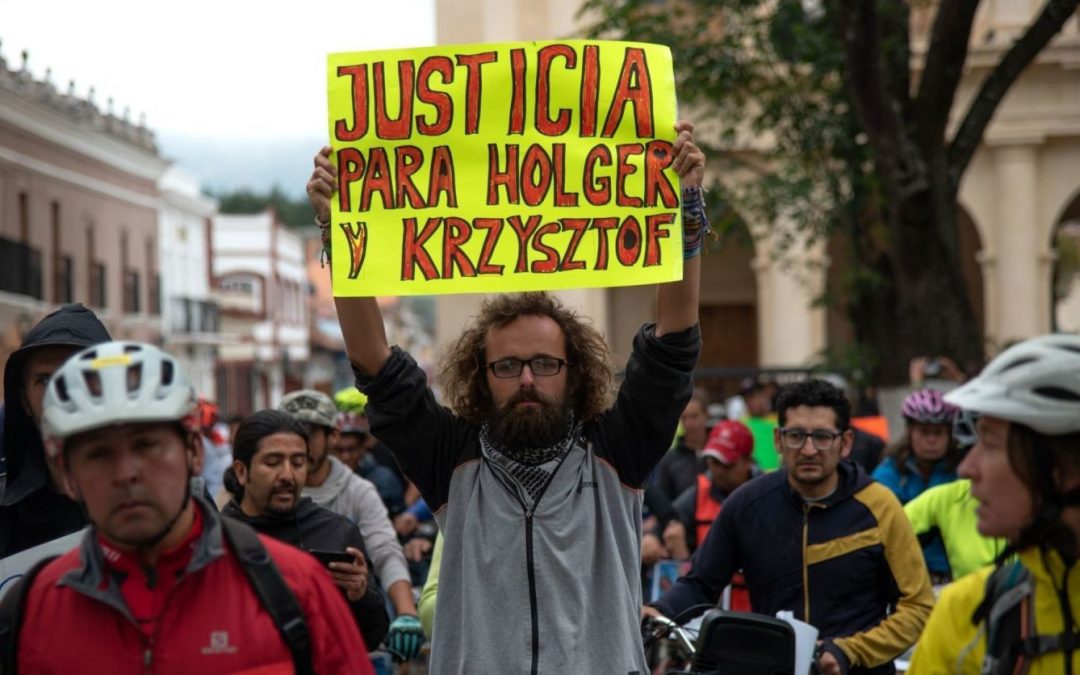 In April of 2018, German cyclist Holger Hagenbusch disappeared at the same time as Krzysztof Chmielewski, another cyclist traveling through Mexico on his bike.

But their experience couldn’t have prepared them for Mexico’s exploding crime rate in recent years.

The two cyclists met in the town of San Cristobal de las Casas on April 20th and decided to travel together to the ancient Mayan ruins at Palenque 200 kilometers (130 miles) away.

Palenque is a tourist destination growing in popularity. Unfortunately, Mexico’s organized crime issues are growing in parallel to tourist visits. In 2017, a year before Holgar disappeared, 28 German tourists were held a gunpoint and robbed after armed thiefs pulled over their bus. This happened in the same approximate region.

The two men were missing for two weeks and last known to be in Chiapas, Mexico.

Discovery Of The Bodies

Chmielewski’s body was found on April 26th and Hagenbusch’s on May 4th. Both bodies were found at the bottom of a ravine in the Mexican state of Chiapas. They were found below a road that runs between Ocosingo and San Cristóbal de las Casas in the country’s far south.

“It’s a very accident-prone area. It’s a very narrow path and the ravine is approximately 200 meters (650 feet) deep. Biking there is actually a very high-risk activity.”

Mexican authorities immediately responded to the discovery of the two bodies, claiming that both must have had a biking accident and falling off of a cliff. They eluded to the curvy roads as the culprit.

The body was in an advanced state of decomposition, and the autopsy found no injuries that suggested murder, though there were multiple fractures, including of the skull.

It wasn’t until a group of fellow cyclists questioned the “accident” conclusion of the Mexican authorities that a newly appointed Mexican prosecutor looked into if the cyclists had been murdered.

“It may have been an assault, because our investigations up to now indicate this was an intentional homicide”

However, officials pushed back.

The regional attorney general in Chiapas, Arturo Pablo Lievano, said there was no evidence of bad intent and everything pointed to an accident. He said they may have been run off the road by a vehicle.

“Those that did this wanted to make it appear like an accident, so they put the bike there, but they made a mistake and used the German’s bike”

When Reiner visited the morgue where his brother’s remains were kept, he was shocked. His brother had a gunshot wound on the back of his head. The Polish cyclist was decapitated and had a foot missing.

So much for “accident”.

The killers were never caught, a common result of disappearance and murder cases in Central America.

On 6 May 2018, people from nearby San Cristóbal de las Casa walked with their bikes, to kilometre 158 on the highway where the two men were found. Some protested the Mexican government in search for more answers.

A Trend In Latin America

Getting answers about the disappearance of a loved one in Latin America is a nightmare. Aside from the embarrassment that government officials feel from the spike in publicity from foreign news media, tourism is a precious and well protected industry in Latin America. To protect their tourism industry, politicians often immediately resort to labeling foreigner disappearances as “accidents”, even if the evidence directly proves otherwise.

This is a clear and obvious trend. After a disappearance takes place, authorities immediately use “accident” as their default statement, then they delay investigations in hopes that everyone stops paying attention.

An obvious comparison is the case of Kris Kremers and Lisanne Froon in 2015, in which both girls disappeared on a tourist walking path, only for pieces of their remains to be found three months later. Panama’s officials claimed that it was an accident, regardless of the many unexplainable facts of the case, including that the bones had chemical traces.

Be Careful While Traveling

I’ve written about numerous disappearance stories in Central America. Sometimes their remains are found and sometimes nothing is found. In 90% of cases, they are not found alive.

The dangers present in Latin America are primarily due to opportunists. I’ve written a guide on how to avoid disappearing while traveling through Central America.

My heart goes out to the families of both Holger Hagenbusch and Krzysztof Chmielewski.