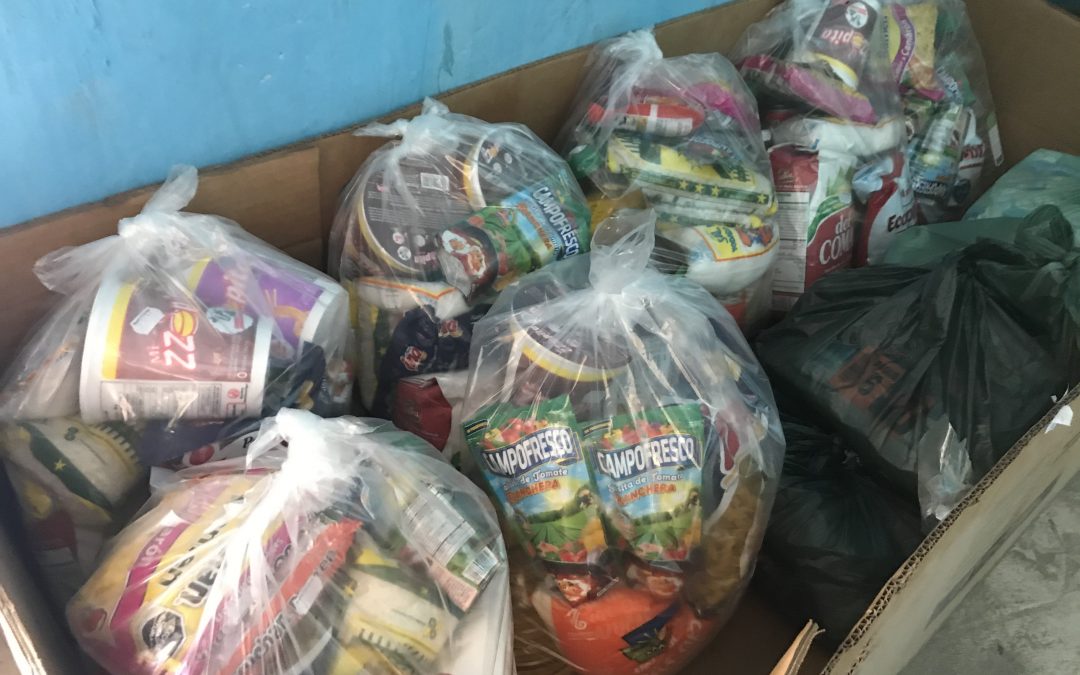 This is our final update for our campaign “Fight Hunger In El Salvador“. You can read the original story here: Famine Flags Are Hanging As Covid19 Starvation Crisis Begins.

Earlier this year, when Stephanie and I started our micro-campaign to help distribute food supplies to families in need in El Salvador, we never expected all of the hurdles we would encounter, nor all of the support we would receive. But we overcame each hurdle and we’ve succeeded in our goal. We raised $543 and distributed food to 24 families, food that was desperately needed when the world was closing due to the Coronavirus shut-downs.

Although $543 doesn’t sound like a lot, that amount purchases a surprising amount of food, especially when accounting for lower food prices in El Salvador and the fact that raw foods (corn flour, sugar, beans, etc) can be used to prepare a variety of meals.

In our most recent and final effort we’ve delivered food supplies to 12 more families, which brought us to the combined total of 24 families helped. Our original goal was to help 20 families, so we’re thrilled to know that we were able to help 4 more families than expected.

We met a lot of families in the process of distributing the supplies. We learned of their challenging circumstances and the difficulties they faced as the world was shutting down. They felt they were forgotten. At times we felt emotionally overwhelmed knowing that we could only help each family to a limited extent.

Stephanie and I purchased additional supplies when the opportunity presented itself. We purchased chocolates for the children and gave families extra eggs for cooking when we were able to provide additional resources. With one family in particular, we helped a single mother to pay the cost of her unpaid back-rent for 4 months, to ensure that her and her daughter wouldn’t be homeless during the Coronavirus crisis. We paid this from our own pocket (not campaign funds). For us, it was a small sacrifice for a large benefit. Although we certainly can’t offer that to everyone, we’re happy to know that this struggling mother and her daughter won’t be homeless.

Learning of these families in desperate need was a very eye-opening and sobering experience. In truth, I wish we could have helped more families. I struggle between mixed feelings of being satisfied with our efforts, but also having a desire to help more. In both cases, we are forever grateful for the opportunity to serve those 24 families that we were able to help.

A lot has changed from the time that we started the campaign. For the first 2 to 3 months, the government was very strict about their lock-down measures. Only those deemed to be “essential” could leave the house. Anyone else needed written permission. The streets were virtually empty. Politics got messy.

After El Salvador’s government finally agreed to re-open the economy, things started improving. The government distributed some food supplies. People were in long food lines of 60-70 people, sometimes more. Eventually the length of food lines shrank. The white hunger flags that were being waved started to vanish. People were able to work again and they quickly jumped on the refreshing opportunity.

Now, in October, there are hardly any hunger flags. Although things are not completely “normal”, we’re seeing progress. Restaurants are open again. Traffic congestion has returned to normal. The businesses that survived are opening their doors and individual vendors are selling their goods in the streets again. The economy is healing.

The challenge now is jump-starting everyone’s confidence in the economy, to win-back jobs that support families. People are more fearful to spend money. There’s discussion of the possibility of a second wave. However, the government has handled things rather well under the given circumstances and I believe confidence is slowly coming back into everyone’s minds. Things are not as dire as they were before.

A Final Thank You

We are so grateful and appreciative to our supporters and those that gave us advice along the way. This was truly a team effort – a cause that wouldn’t have materialized without everyone that was involved.

Together, we have prevented hunger and starvation. Our supporters allowed us to help many more people than we could have accomplished alone. Stephanie and her mother Maritsa were wonderful in making this all happen smoothly. My parents gave us wonderful advise on handling the process of charitable giving and managing the hurdles we faced. It was a group effort and I thank everyone that contributed in some way.

I wish everyone the best. Thank you again.