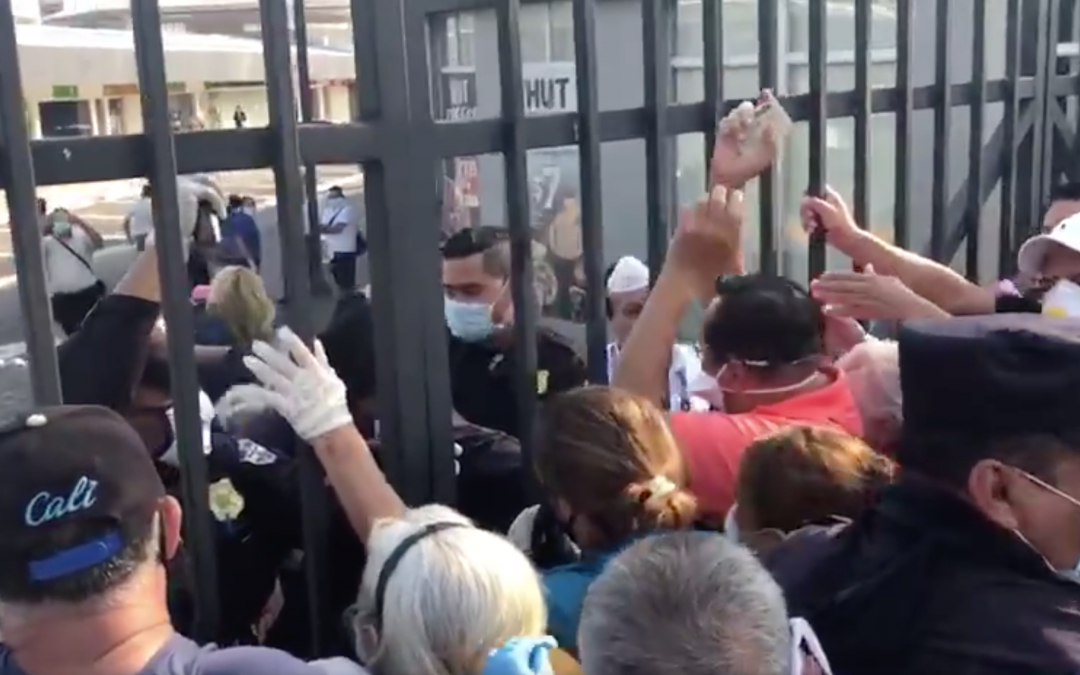 Things are getting a little heavy here in El Salvador with regards to the Coronavirus pandemic. While El Salvador only has 32 Coronavirus cases, the public is starting to express frustration. Or maybe it’s shady politics, but I’ll get to that in a moment.

Earlier in March, El Salvador’s government announced that the head of every Salvadoran family will be given $300 in order to help afford food and necessities during the Coronavirus lockdown. The $300 would be automatically deposited into people’s bank accounts or given a check, depending on circumstances. In the same press conference, President Nayib Bukele announced the lockdown and everyone was asked to stay in their homes in order to combat the spread of the Covid-19 contagion.

The $300 Assistance Program Is Being Presented With Overwhelming Challenges

The lockdown has been widely successful. With only 32 Covid-19 cases so far, the country has seen a slower than expected growth in cases. However, the $300 payout to families has proven to be a bigger challenge than expected. There’s no formal system to distribute the funds in an organized manner. In the government’s decision to make quick and decisive action, it appears they may have made promises that they can’t execute in a timely manner. Government offices are working closely with banks at the moment.

While some families have received the funds, some have not. Many families that have not received the funds are from the “informal sector”, as the news media in El Salvador calls it. Given the large impoverished class here, many Salvadorans have living situations that would exclude them from receiving a check, such as living in shanty communities which are considered “informal” dwellings.

When families are denied or left out of receiving the funds, they can request a case review. Therefore, many families are asking that their specific cases are reviewed.

El Salvador’s Ministry of Finance Is Being Put Under Pressure

Today, thousands of Salvadorans gathered outside of the Ministry of Finance (called the “CENADE”) in order to check the status of their case and demand their payments.

The situation became tense. From the early hours in the day people gathered on the outskirts of the CENADE to request a review of their case, but when the offices became overwhelmed with long lines of people, President Nayib Bukele announced the closure of these places, considering that “the crowds are a risk of contagion”.

“Our country is too poor, 90% of the population is unbanked and we have not had a census for 14 years. 90% of the people who have arrived at the banks did not even have to arrive today. Most of the people who came to the CENADE were coming to receive the money, when we already said that no money would be delivered [to those offices]. But many did not read it. Others think that if they get there first, they will beat the others.”

This is clearly a challenging situation for everyone. The poor do not know what to do and are often misinformed, due to lack of internet access. They are struggling. The President is trying to remain calm, methodical and working to prevent the spread of the virus, while formulating a plan to distribute the desperately needed money, while also combatting two opposing political parties that would love to see him fail. Similarly, the news media here is privately owned and controlled by members of the political opposition. Essentially, it’ll take him a miracle to pull this off.

It’s possible that the president’s political opponents are giving cash to people to try to instigate riots. There’s a lot of political discourse online among Salvadorans, with many people believing that the political left (FLMN Party) are funding small mobilized groups of protesters to raise tension in the streets and public areas. As I previously wrote about, the two mainstream political parties are very pissed-off that Nayib Bukele won the presidency last year. They’ve already performed a lot of shady shenanigans, such as doing secret deals with the gangs to attempt winning the election.

Here’s an example of people being offered money:

I have no doubt that the political left here in El Salvador would try to use despicable means to overthrow the President. Not long ago, they were a well funded political party with high ranking politicians that owned luxury mansions in the countryside. They’re no longer in power and their party was demonized once it was discovered that they did shady deals with the gangs. With that said, it’s important to mention that my speculation doesn’t mean that the left is actually promoting riots. Maybe they’re not. It’s impossible to know, and that’s exactly why dirty politics is downright dangerous. If people truly are suffering, or even starving, maybe they won’t get the help that they need. It’s sad and frustrating.

ElSalvador.com is an established online news source in El Salvador. It hasn’t been clear in the past what the political interests of the website owners are. Normally they just publish the news, without getting personally involved. However, that changed today. Whomever was operating the twitter account for ElSalvador.com forgot to switch to their alternative Twitter account and accidentally published a highly critical comment of the President on ElSalvador.com’s main Twitter account.

The President even commented on their mistake and the news agency quickly deleted the tweet. This was the first time this happened with the account. That’s an overwhelming “OOPS”. I guarantee that whomever accidentally published this was harshly scolded, if not fired from the position.

Anyway…back to the Coronavirus story.

Public Gatherings Are Inevitably Facilitating The Further Spread Of Coronavirus

There’s a delicate balance happening between people needing to receive the $300 to support their family and people actively trying to prevent the spread of the deadly Coronavirus. Social Distancing is important for a reason, however, now that $300 is on the line, we’re starting see a break-down in social responsibility. People don’t care about Social Distancing if they’re not getting the $300 they were promised.

In this critical moment it’s very important for the president to be so methodical and swift about distributing the money to the families. The families can only survive for so long until they’ll run out of money to feed themselves.

El Salvador has a lot of poverty. But the discomforts of those in poverty are slightly alleviated when people can work or operate their own small businesses. However, with the lockdown in place people are not permitted to leave their homes, except in very rare cases. Most people are not permitted to work, unless their job is “essential”. If they violate the rules, they’ll be put into quarantine, which means riding out the lockdown until the end (which still has at least two weeks left).

As people’s limited resources dwindle, people will essentially have two options: starve or take to the streets and create chaos. I guess an alternative is to go into be public and have the police take you to secure quarantine facility where I believe you will be fed. It’s been very sobering for me to witness the Coronavirus pandemic in El Salvador.

As I mentioned in my last article, graves are already being dug in El Salvador in preparation for the potential death toll from Coronavirus. The problem in El Salvador’s case is that Coronavirus alone will likely not be the only cause of death. People have limited food supplies, political destabilization may lead to rioting and looting, medical facilities have limited resources and there’s already violent gangs here that resort to violence, even during non-apocalyptic pandemics. Ugg. It’s terrifying to imagine these things. My mind races as I think through things. Maybe I’m overthinking it.