Nobody Walks Off-Trail Into The Jungle Wearing Shorts 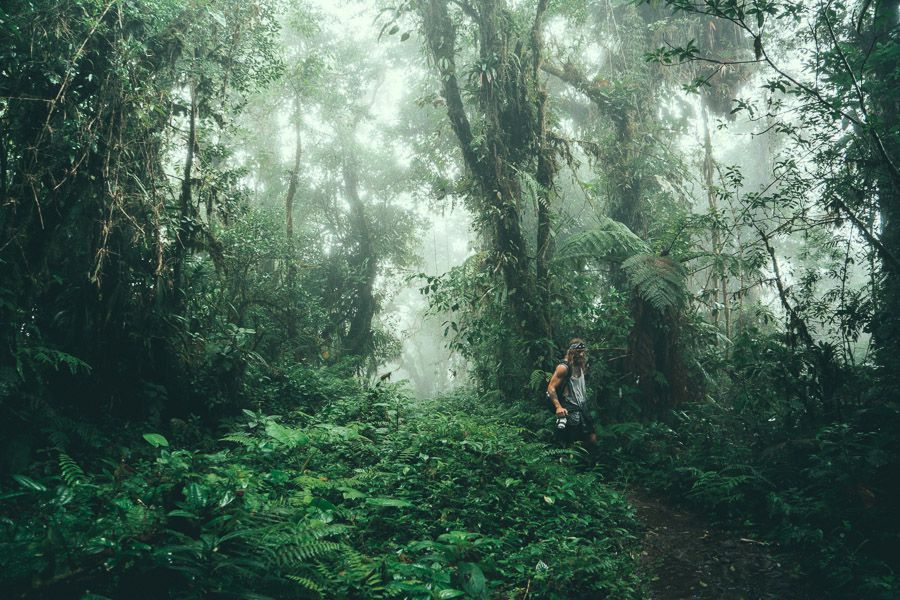 Those that are familiar with the Kremers Froon case know that there are many unanswered questions. Regardless of whether the two girls died accidentally or if they were murdered, one thing is clear: Formulating a coherent theory is very difficult when giving heed to all of the evidence.

It’s important to evaluate the trail and jungle conditions. The “getting lost” scenario seems a lot less likely when you realize that it’s not feasible to travel through the jungle without being on a trail.

If you want a quick summary of this article: The rainforest jungles of Panama are incredibly inhospitable – which makes it highly unlikely that Kris and Lisanne would consider veering off-trail to go into the jungle. The rainforests are so thick with vegetation, that walking off the trail would equal to climbing through a wall of plants. Nobody would willingly part from the trail and go into the thick forest.

Even explorers that are prepared with appropriate clothing, waterproof boots and a machete know that it’s difficult and dangerous to pass through the dense rainforest. Two girls on a day hike, in shorts and t-shirts, would not willingly leave the trail without a very strong reason to do so.

In truth, it’s ridiculous to me to imagine that they would attempt to walk into the jungle. However, nobody knows what happened so I try to remain objective and open-minded to all possibilities.

Before we dive into the local jungle conditions, here are some helpful related links:

I live in Central America and I’m actively working with various individuals to analyze the existing information of the case. Similarly, we’re working together to gather new evidence surrounding the case.

Anytime a newcomer is first introduced to this disappearance case, it’s good for them to start with the general premise that the girls got lost somewhere during their hike. That premise helps everyone establish a framework to understand the case. After that framework is in place, you can begin exploring additional circumstances surrounding the case: The locals in the area, the backpack contents, the swimming photo, etc.

Finally, you’ll eventually realize that much of this case is extremely flimsy. The framework itself begins to be challenged. For example, there’s virtually no proof to conclude that the girls even “got lost” at all. They could have returned to Boquete after their hike. Did they go on the hike with Feliciano? Similarly, it’s possible they weren’t alive when the nighttime photos were taken. Also, why did the locals change their timelines in unison when the backpack was found?

We know they disappeared. We don’t know if they got lost.

Nobody knows where they disappeared, for a number of reasons:

These are only some examples of conflicting information for why nobody knows exactly where or when the girls disappeared. Similarly, the locals themselves provided inconsistent information about when the last girls were seen. The case details are a complete mess and sorting it out isn’t possible without some degree of speculation.

Why does this matter? This matters because many people assume they got lost in the jungle. That’s a huge assumption.

Those that believe in the “accident” theory assume that the two girls got lost in the jungle and succumbed to the elements. They cite how easy it is to get lost. Simple. Makes sense, right? Not exactly.

It’s important to recognize the incredibly large hurdles that are necessary in order to conclude that they would have entered the jungle in the first place.

First, the trails are not “the jungle”.

People without experience in tropical conditions often don’t realize that the jungle is very different than they might imagine. You might image someone walking through the jungle, and then… wait. Stop. Rewind. In the jungles of Panama, walking is virtually impossible. There are simply too many plants and uneven terrain. People that visit Panama’s jungles stay on the trail because they don’t really have a choice.

But they were in the jungle, weren’t they?

Il Pianista Trail is a clear-cut trail. It’s not “the jungle”. Thousands of vacationers visit the trails each year. It’s designed with tourists in mind. There’s no point on the trail that it’s necessary to walk through the jungle to continue on the trail. It’s an open trail, mostly surrounded by fields, clear views and the obvious walking path. It’s very clear to any visitor where the line is between the trail and the jungle.

Also, there are no steep ledges or ravines anywhere near Il Pianista Trail. There was no place on the trail that Kris and Lisanne could have fallen from a height. Certainly, if they had continued 20+ minutes north, past the Mirador, they trails would become more rugged. And maybe they did that. But even then, they would not have left the rugged trail and walked into the jungle.

Second, “the jungle” is unpleasant and overwhelming.

The jungle is essentially a wall of vegetation. It’s very difficult to hike through without the proper gear. A machete is an absolute necessity to pass through the dense vegetation. Trees and vegetation grow very thick because the conditions are optimal for plant-life.

After stepping one meter into the wooded area, they quickly would have seen how difficult it is to walk and move. The chest-high plants, plus the vines, mud, uneven ground, boulders and poor visibility would have made it treacherous from the very first moment. It’s simply not possible to move quickly through the jungle.

Third, they were not prepared for the jungle.

Both girls were wearing short sleeve shirts and shorts, without gloves, no machete and their backpack wasn’t designed for a rugged outdoor setting. Their backpack and clothing would have been torn to shreds.

Fourth, there are very few reasons that a person would step foot into the jungle.

Nobody in their right might would intentionally go into the jungle unprepared. It’s would be a terrible feeling, suffocating and claustrophobic. So if Kris and Lisanne intentionally veered off path and entered into the jungle, there could have been only three possible motivating factors: Fear, desire or a mixture of both.

The key problem with all of these theories is that it’s simply too difficult to move your body in the rainforest. If they were fleeing someone or something, they would have made a lot of noise in the trees. If they were going to do something fun – wouldn’t there have been a trail? Without the proper gear to carve a path, you’ll immediately face a wall of enormous plants.

Lastly, there are numerous trails in the area, numerous people live in the area and if they somehow did get lost, their cries would have been heard at some point during the following days after their disappearance.

Putting It All Together

In summary, it’s less appealing to make the assumption that they got lost in the jungle when you know the conditions of the dense jungles of Panama. They would have to be mentally unstable if they decided to veer off the trail to enter the jungle. Plus, they would have had difficulty passing through the thick vegetation.

Aside from the fact that there’s little evidence to suggest that they got lost, it’s important to give consideration to the inhospitable conditions of the jungle, especially when forming theories about their disappearance.

Certainly anything is possible. The accident theory and the murder theory both require very specific conditions that need to be met in order for the theories to carry weight. It’s complicated. Unfortunately, there is no “simple” theory.