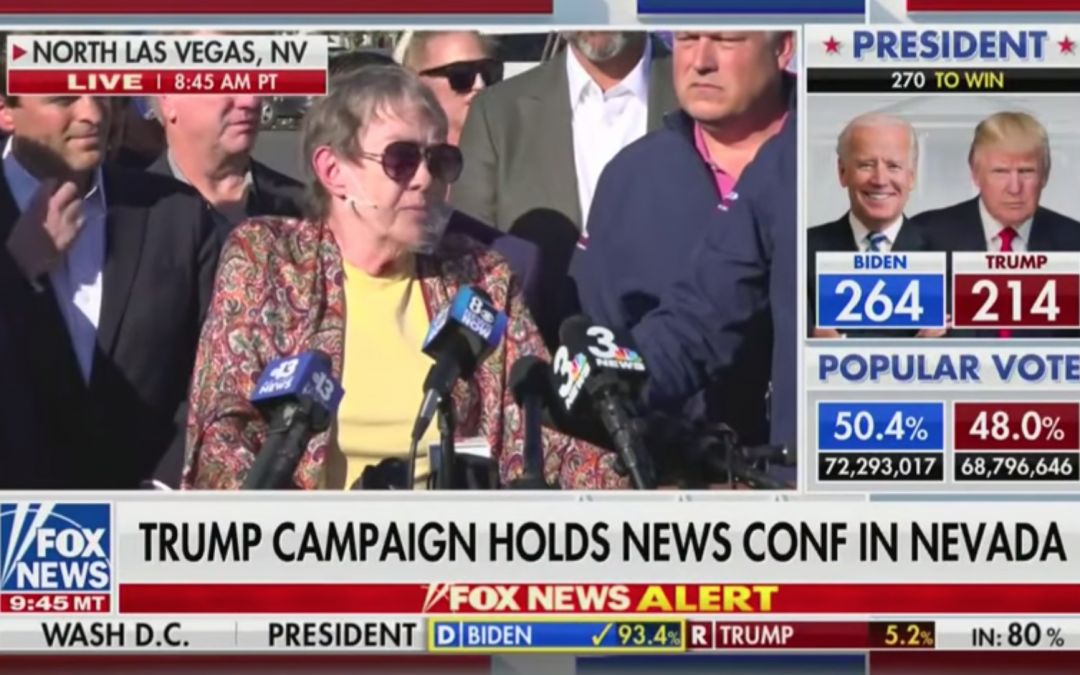 The story of Jill Stokke is big on Twitter right now and quickly spreading across the web and social media. Jill Stokke, 79, is a Nevada voter and legally blind. She needed assistance filling out her ballot but when her ballot never arrived in the mail, she went to vote in person. That’s when her troubles arose.

When she went to vote, she was told that she had already voted.

The mainstream media has mostly failed to cover her story so far, except for Channel 8 News and Fox News, whom made the story national news with President Trump’s campaign. Jill Stokke originally told her story to Channel 8 news on November 2nd.

The video from Fox News can be seen here:

I recorded the transcript to clarify her public statement:

“Hi, my name is Jill Stokke. I went to vote and was told I already voted. I pursued the matter and in years past I always voted in person. This time they mailed out the ballot and somebody took my ballot. They also took the ballot of my roommate. I was told by the interviewer for channel 8 when I said ‘Did other people do this?’ and he said ‘yes’. He said ‘you’re the first to tell me’. Thank you.”

Essentially, an unknown person had voted on her behalf in this 2020 election. Typically Jill Stokke votes in-person, which is the most common way of voting during American elections. However, for the unprecedented 2020 elections, she opted to vote by mail.

But when her ballot never came in the mail, she decided to ventured out of her home, even with her disability, to vote in person. It was only then that she discovered that someone had stolen her ballot, filled it out, and submitted her ballot.

Jill Stokke states that she requested the ballot to be mailed to her and that somebody took it from her. Although undetermined, someone either intercepted her ballot during its time with the postal service, or somebody stole the ballot from her mailbox. It’s unclear whom she planned to vote for.

There have been numerous stories of potential election tampering being passed around social media. Jill’s story isn’t the first. However, it’s one of the first to be widely publicized. A lot of the stories floating around aren’t picked-up by mainstream news outlets.

WATCH: #Nevada voter Jill Stokke on how her ballot was stolen pic.twitter.com/oSIMy88dFb

This is just one Twitter thread. Many more exist.

Both sides are concerned about the vote, as they should be. Biden and Trump are surprisingly neck and neck with votes. It’s a close election. Both candidates have received more votes than ever recorded in USA history.

As all Americans know, this election has already been chaotic and painful to bear. We’re two days past the official election date of November 3rd, yet, still no answer exists. The vote counters are moving dreadfully slow, both parties are unsatisfied, theirs a lot of uncertainty, and everyone has their eyes on potential election fraud.

Both Trump and Biden’s campaign are in the process of gearing up for an unprecedented legal battle. Aside from Jill’s story, President Trump will investigate numerous other potential unusual circumstances of the election. There are numerous claims of dead people voting, late-night ballot dumps for only one candidate, aside from other unverified stories.

At this point, it’s very difficult to know what’s real. There’s a lot of noise and confusion, unverified information and suspicion from both sides.

Hang in there my fellow Americans.