Caravan of 9,000 + Hondurans Headed For The United States 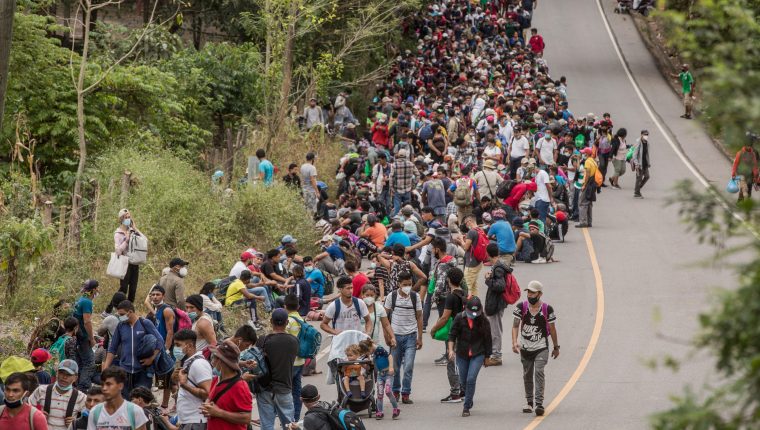 The United States has been facing a significant number of political challenges lately. With the new President Elect, and the outgoing Trump Administration, a new challenge is in store. Now, an estimated 9,000 Hondurans are traveling to the United States in hope of attaining asylum status.

Asylum status has been an increasingly complicated debate in the United States. With Joe Biden’s inauguration day looming, he’s already promised “a fair and humane immigration system”. And that’s arguably good, or better to some degree, compared to President Trumps rigid system.

The migrant rights group “Pueblo Sin Fronteras”, on behalf of the caravan, has directed the following statement at the incoming Biden Administration:

“We recognize the importance of the incoming Government of the United States having shown a strong commitment to migrants and asylum seekers, which presents an opportunity for the governments of Mexico and Central America to develop policies and a migration management that respect and promote the human rights of the population in mobility. We will advocate that the Biden government honors its commitments.”

Biden’s incoming administration has already promised to end the Migrant Protection Protocols (MPP), which keeps migrants in Mexico as they await their hearings.

Asylum seekers from Honduras are traveling to the United States in order to flee violence and economic hardship, which was worsened by COVID-19 pandemic and recent storms.

I previously wrote about the two massive hurricanes that decimated Nicaragua and Honduras.

“The combination of COVID-19, social exclusion, violence and climate-related disasters that occur at the same time with a magnitude seldom seen before in Central America raises new humanitarian challenges.”

The International Committee of the Red Cross

The caravan’s goal is to pass Guatemala into Mexico, then cross Mexico’s border into the United States. The trip is approximately 1,000 miles (about 1,600 km).

The large caravan has put other countries at risk of increased Covid outbreaks. Numerous countries in Central America have very strict restrictions regarding travel right now. Crossing the border, from Honduras into Guatemala, for example requires a negative coronavirus test.

According to Associated Press:

Guatemalan President Alejandro Giammattei issued a statement calling on Honduran authorities “to contain the mass exit of its inhabitants.” On Friday, the migrants entered Guatemala by pushing past about 2,000 police and soldiers posted at the border; most entered without showing the negative coronavirus test that Guatemala requires.

To be frank, Guatemala is rather pissed-off at the failure of Honduras’s government to contain their own citizens and reduce the risk of the virus spreading. Guatemalan police and soldiers were put in a difficult position, where they’re being forced to do the work of Hondura’s government.

The challenges for Biden will be numerous – his strong statements that support asylum seekers are attracting large swaths of immigrants. Inversely, Biden is also a staunch promoter of Coronavirus restrictions and lockdowns. Furthermore, he was put in the spotlight when President Trump mentioned the immigrant “cages” that were constructed during the Obama-Biden presidency. Will new detention centers be constructed and those cages demolished? We’ll know soon.

In either case – Joe Biden has the corporate news media on his side. It’s unlikely we’ll get much insight into what’s truly happening at the Mexico-USA border if and when these caravans arrive. Obama’s cages were largely overlooked until Trump started using them, then they hit the spotlight.

As always, many are concerned about Democrat’s promises and how it will affect Americans living in the United States:

It’s important for the United States to determine an asylum policy that’s fair for asylum seekers, immigrants in the United States that have already followed the law, and Americans – a very delicate balance, especially in today’s political climate.