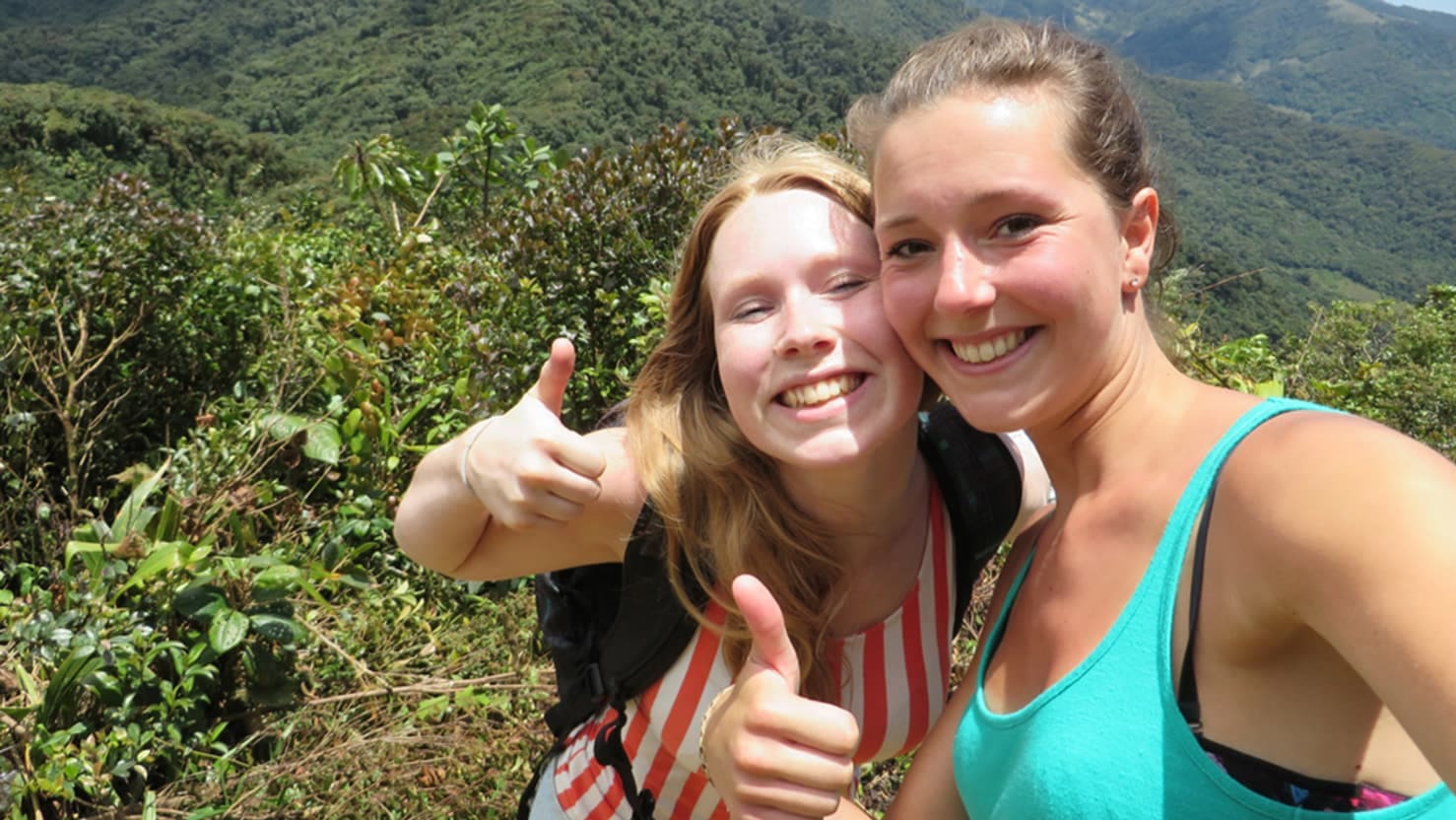 This is a brief analysis of the backpack and the backpack’s contents, which were discovered by search teams after Kris Kremers and Lisanne Froon disappeared in Panama in 2014. The discovery of these items were an important part of the investigation into their disappearance.

Unfortunately, the case was never investigated thoroughly, nor was the public informed about very much about the case… until recently. More information has been disclosed about the case in the last 6 months than in the past 7 years combined.

This article was written by Matt, whom previously wrote about the night photos, the Mirador photos, and a forensic analysis of the phone usage data. Matt has worked closely with myself and Romain in order to find new information and move the case forward. Romain also published an article with his own analysis of the backpack contents: LE CONTENU DU SAC À DOS (French)

This article is based on official data that was made available to me by an anonymous source. Here I’ll discuss the backpack that is seen in the day photos, from the time it was found until it was forensically examined.

Please note that some information is being withheld by the author to protect the privacy of people involved. Where this is done it is marked with “(withheld)”. Also, the name of the person who found the backpack is changed to protect their privacy.

The backpack was found on June 11, 2014 by the Culebra river in the district of Valle Risco, community of Alto Romero, roughly 10-15 km north of the Mirador. It was found by Jane Doe (name withheld for privacy reasons) who went to the river to take a bath. She noticed the backpack within some driftwood at the shore of the river near huge boulders and decided to investigate it. Upon opening she discovered that the backpack contained cell phones, a camera, and other items.

It was the first time in a long time she had gone to the river to wash as she usually uses a creek closer to her residence. Therefore, it is not known for how long the backpack could have been in this location. Upon notifying her husband about her discovery, they called the authorities who came to inspect the findings the next day.

The backpack is described as a Burton brand backpack with light blue straps, black accents, and a blue and purple pattern.

The following items were found inside the backpack:

In other official data it is reported that there was also a small combination padlock in the backpack. It is noteworthy that no SIM card was reported to be in the Samsung phone as later on there is a SIM card related to this phone. It is possible that this is an oversight of the person taking the inventory just as the brand of the Camera seems to have been recorded incorrectly.

Canon SX270 HS
It is not known if the camera was still functional after it was found. However, on photos of the camera that the author has seen, it does not appear damaged. The SD card was accessible which is not uncommon since digital flash media can survive in water, especially fresh water for long periods of time.

Apple iPhone4
It is not known if the phone was still functional, however it was possible to take an image of its permanent memory. On photos of the phone that the author has seen, it does not appear damaged.

Samsung Galaxy S3
It is not known if the phone was still functional, however it was possible to take an image of its permanent memory. On photos of the phone that the author has seen, it does not appear damaged.

The backpack was found in good general condition, but is dirty and contains several damages, which are listed below.

Damage 1 involves a loosened seam. The simplest explanation for this damage is loosening of the seam. The nature of this loosening cannot be determined, and it may not have been caused by a great force. Possibly the seam was weak due to a manufacturing defect and the damage occurred due to normal use.

Damages 2 and 3 both indicate physical wear. The scratches in the plastic seem to be caused by the fasteners being rubbed along something. The white discoloration of the fabric can be explained by abrasion. The color of the backpack is applied as a print and only the surface of the fabric is colored.

It is concluded that damage 5 was caused by a sharp edge. Damage 5 is located near and parallel to a seam. The straight fabric ends are located on the side of the seam and may have been shielded from external influence by the seam and thus remained intact. The fabric ends on the other side of the damage are frayed, probably because they were less protected by the seam.

The straight fabric ends found in damage 5 show that it was created by a sharp edge. It is not possible to derive additional information regarding this sharp edge from the characteristics of the damage. In this damage, material based on polyester urethane was found. This material is frequently found as foam or elastomer. The origin of this material is unknown.

Damage 4 is located near damage 5. This gives the impression that both damages are related to each other. However, damage 5 shows that straight edges can become frayed. Therefore, the possibility that damage 4 was also caused by a sharp edge cannot be excluded.

In damage 4 a piece of the textile is missing. This too can be explained by tearing or by the effect of a sharp edge. Damage 4 can be explained by both tears and by the effect of a sharp edge. Although the damage on the backpack (scratches and abrasion) is consistent with travelling in a river and rocks, however the damage is very light and probably not consistent with a travel of many kilometers in a wild river.

A total of 13 DNA samples were taken of the straps, zippers, and edges of the backpack. Out of the 13 samples, DNA was only found in three of the samples:

Sample 01
DNA main profile: Female A
DNA side characteristics: At least one unknown person, at least one of whom is male

Sample 05
DNA Mix Profile: At least two unknown persons, at least one of whom is male

The fact that the backpack was outside for an unknown amount of time time and in the water made obtaining meaningful DNA evidence difficult. No DNA match for the samples could be obtained from criminal DNA databases. The DNA samples did also not match the DNA of Kris and Lisanne.

The DNA analysis should not be overvalued as the DNA found is most likely from the persons who found and handled the backpack after its discovery.

Biological Traces
The following biological specimen were found in or on the backpack:

Soil Traces
The following soil specimen were found in or on the backpack:

Other Traces:
The following specimen were found in or on the backpack:

There is nothing out of the ordinary. Leaves and pieces of plants, as well as sand and clay, should be expected to be on the backpack since the backpack spent time outside, in the water and on the river bed. The shell fragment has likely still been there from a previous unrelated visit to a beach and the plastic fragments could be packaging or other residue from foods or snacks that were in the backpack before.

One question that should be considered is how the backpack could travel from its last known location on the Mirador to the location where it was found.

For this there are two possibilities:

For this it is not considered that Kris and Lisanne could have walked to Alto Romeo and lost the backpack there. This would only leave a 3 rd party who would have had to have backpack in their possession and dropped it onto the shore of the river.

This requires a motive, which could be:

Either way a prerequisite for it to travel by water would be that it enters the water first, which could happen in several ways:

One question that remains is if a backpack can travel in a river that is said to disintegrate what falls into it and arrive with almost no damage to itself or its content several kilometer down stream. If it had travelled so far in the water, one would think that the electronics inside would have been damaged. The backpack also potentially travelled surprisingly far, while items that float on a river are likely wash up on the shore.

I send a big “thank you” to Matt for his excellent research and analysis into this retrieving this information and making it available to the public. This is excellent work.

If you have any questions about his work, you can contact Matt directly by emailing researchtt2@gmail.com.

Thank you to all of our readers!