Watch: Guatemala Detains Thousands of Hondurans That Try To Breach The Border 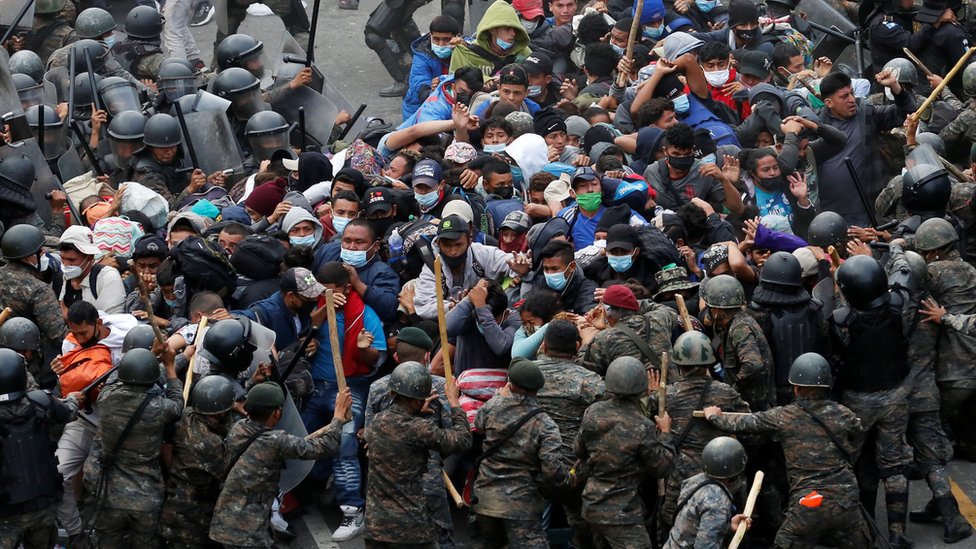 A new video has emerged, showing that Guatemala’s government is doing everything it can to deter thousands of Hondurans from violating border crossings illegally and putting Guatemala at further risk of Coronavirus infections. Yesterday thousands of refugees left Honduras, sparking conflict with Guatemalan authorities after they illegally breached Guatemala’s border and entered the town of Chiquimula, Guatemala.

The Honduran immigrants are pushing their way north towards the United States border, hoping to collect on President-Elect Joe Biden’s promises that he’s made over recent months.

President-Elect Joe Biden has already made promises that asylum seekers will be treated more fairly than they were under Trump’s administration. Further, Biden has also promised to reduce strict measures that President Donald Trump has put in place.

The video shows thousands of Honduran’s pushing hard against a wall of Guatemalan authorities in hopes to penetrate their formation. However, the authorities used batons and shields to beat back the crowd and eventually succeeded in pushing them back.

Many of the Spanish comments on YouTube shed light on the opinions of nearby countries. The comments often cast blame on the Honduran government and claim that the Honduran’s should be fighting with their own country’s leadership, not Guatemala’s authorities.

“Why don’t they do this at the presidential house of their own country, to make a fuss and disorder.”

Some comments applauded Guatemala’s reaction to the circumstances. In the second most popular comment, with 1,300 upvotes, another person congratulates Guatemala for maintaining order:

“Congratulations to the authorities of Guatemala for maintaining order in their land.”

diseo2 (Translated from Spanish To English)

Lastly, many of the comments also refer to the circumstances as an “invasion” and say that Hondurans have no right to cross borders illegally and should obey the law

Confrontation Between Honduras and Guatemala

The challenges are very complex for every side involved, especially considering that Coronavirus is weakening each country’s population and causing serious starvation threats.

Honduran citizens have very little time and resources left after recent events that destroyed their country.

Recently Honduras was destroyed by two Category 4 hurricanes that ripped the country apart. The hurricanes destroy Honduras’s crops, which the population depended on for food resources. The hurricanes also destroyed homes, contaminated water supplies and left many with few resources to survive.

This comes at a time when countries in Central America are facing strict lockdowns to combat Coronavirus. Many countries of Latin America were ill prepared to handle the pandemic from the beginning. The recent upheavals have only made the circumstances more dire.

The Government of Honduras Responds

The government of Honduras responded to the Confrontation with guatamala in a public letter to the world. The translated text reads as follows:

The State of Honduras communicates to the national and international community its concern regarding the unfortunate events that occurred in Guatemala, when a group of Central American migrants tried to move through Guatemalan territory on their way through the migration route to the United States of America.

The State of Honduras recognizes that migrating is a human right. The Inter-American Principles on the Human Rights of All Migrants, Refugees, Stateless Persons, and Victims of Trafficking in Persons establish that in the execution of the expulsion or deportation of a migrant from its territory, the State shall ensure the observance of rights of migrants guaranteed by national, regional and international law, and in particular the rights of international protection, principles that must prevail in any situation that involves people exercising their right to migrate and in that sense avoid putting the human life.

The State of Honduras urges the State of Guatemala to investigate and clarify the actions carried out by the Guatemalan security forces and once again, reiterates that only united as a region, work should continue to confront irregular migration, caused by social conditions that cross our countries and that unfortunately is exploited by organized crime that is dedicated to human trafficking.

The State of Honduras reiterates the call to the Honduran brothers not to expose themselves to the dangers that the migratory route to the United States implies in an irregular manner.

As you can see, Honduras’s government wasn’t interested in claiming responsibility, nor were in any immediate rush to resolve the issues with the migrants, nor Guatemala. Instead, they responded with “migrating is a human right”.

Is migrating a human right? That’s debatable considering it requires crossing international borders illegally. Migrating may be a right, but it’s not a right to cross into foreign countries without prior approval. The Honduran government should be amplifying it’s efforts to prevent the need for migration. Honduras’s lax approach to resolving these issues is putting strain on nearby countries, countries which also were the victim of the recent hurricanes and limited resources due to Coronavirus lockdowns.

It’s uncertain what responsibility President-Elect Joe Biden holds for these recent events. Many Hondurans are leaving their families, breaking border laws, and taking significant risks…all with the hope that Biden will keep his promises of opening the borders to them.

If the Hondurans successfully make their way up to the United States and Joe Biden rescinds his offer to asylum seekers, they refugees will have no place to turn.