My 5 Craziest Experiences While on My 85 Day Backpacking Trip 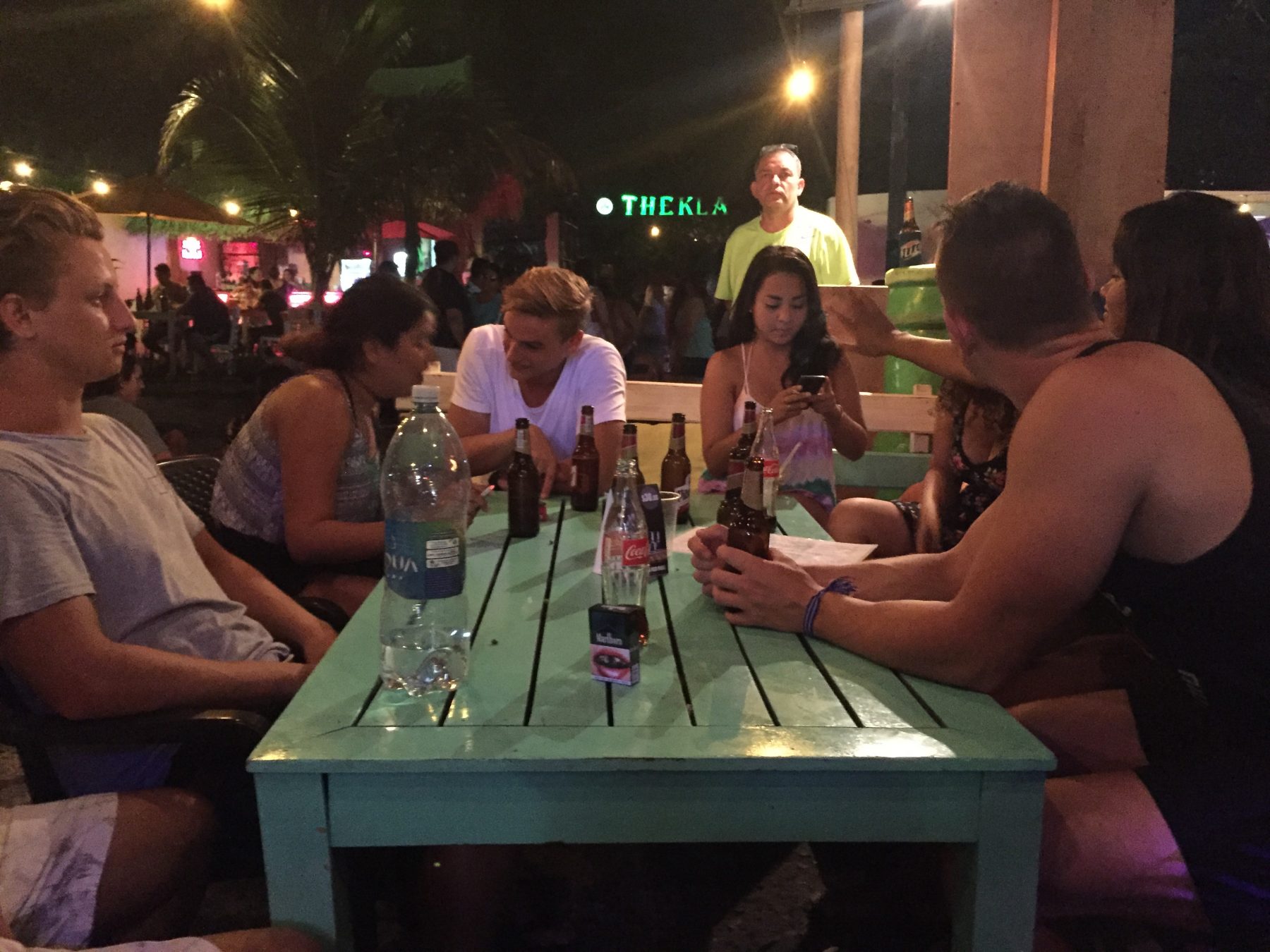 In 2017, I did an 85 day backpacking trip in Central America. I travelled 5 countries, starting in Mexico and traveling to Nicaragua with nothing but my backpack and a small shoulder bag. I visited 5 countries.

A quick note: When alot of people think of Central America, they think of Cancun, Mexico. I wasn’t into it. It was overcrowded, dirty, overpriced and overly-commercialized for me. There’s so much more out there.

I’ve had a lot of crazy experiences, but I’ve narrowed my list down to 5 of my favorite and most memorable. Hopefully my experiences inspire you to travel and step out of your comfort zone, because they certainly did for me.

I’ll get to the more wild ones in a minute. But I need to start off with one of my craziest and more dangerous experiences: Volcano Boarding. Volcano boarding is similar to snow-sledding, except it’s down a volcano with a semi-protective suit (because volcanic rock is dangerous as hell!). I had to sign a non-liability waiver with the tour company before going. It’s very easy for injuries to happen, because volcanic rock is sharp with jagged edges. Plus, the rock is extremely unforgiving. It doesn’t move on impact like sand or snow will move.

There are only two places in the world that people can go volcano boarding:

During my 85 day trip, I made it my goal to go Volcano boarding in Nicaragua at least once. From the moment that I heard that it exists, I was hooked on the idea. I finally got my chance:

It was truly a crazy experience. Volcanos are dangerous and treacherous. Imagine volcano boarding down a volcano after a night of drinking beers at the beach. That was me. You can read more about my experience on this page Volcano Boarding in Leon, Nicaragua.

Playa El Tunco in El Salvador is known for having a lively nightlife, wild beach parties on weekends, surfing and delicious food. During my 85 day trip, I wanted to see what El Salvador was all about, so I hopped on a small bus with about 12 other backpackers and left Guatemala. It was a last-minute decision. I had no idea what to expect in El Salvador.

When we arrived at El Tunco in the afternoon, things were very quiet. It didn’t seem like a party place at all. The beach was beautiful and the town was very small. It hardly seemed like a place for throwing back beers.

Over the following days, I slowly learned how the social scene worked. The days are quiet and during the night things start to materialize. A good example was the last day that I was there. The daytime was very quiet…

Then the night-time came. A group of people backed up two big trucks and started unloading equipment. “What the hell is going on?” I thought to myself. As they worked, I realized that they were constructing…a stage. After a couple hours, this happened…

Then later, a lot of this happened…

The night was incredible. I stayed in El Salvador for an extra week longer than I had expected because the social environment was so good. The beach is definitely the place to be in El Salvador. People are very social, open, friendly and fun to hang out with. I’ll never forget that experience.

To read more about my experience, check out my other articles about El Tunco, El Salvador.

#3. Snorkling With Seaturtles in Mexico

While hanging out in Tulum, Mexico, I had heard of a few different beaches, but I knew nothing about them. In Tulum, one of the friends that I met was a girl from California. She really wanted to go to the beach, so we grabbed our things and left the hostel at about 9 AM.

We ended up at Akumel, which is this gorgeous beach. When I went swimming, I was somewhat startled – a 3 foot (1 mt) seaturtle swam up right next to me. It basically scared the shit out of me, because I had no idea there were sea-turtles in this area and I had never swam with anything other than humans and perhaps small fish.

The seaturtles were about 2 feet long and were absolutely gorgeous. Their colors were brilliant and they seemed to glide through the water without any effort. Having the snorkle with us was really cool.

You can read more about my experience on my page about Akumel, Mexico.

When I was in Mexico, I was having an awesome time. I had already met so many people and had so many awesome experiences. When I first heard this rave, I was apprehensive. I wasn’t sure what the big deal was. After all, the beaches were already lined with cool bars. Why go inland (away from the beach) just to drink some beers and listen to good music?

No no. It was way cooler than I ever could have imagined. They flew a German DJ to Mexico for this Rave. The music was out of this world. Plus there was a light show. Plus there was shenanigans. Plus a lot of interesting people there.

I will forever remember this experience. At the party I met one of my great friends Alejandro and we stayed up through the morning talking with friends and talking about everything we could think of.

You can read more about the experience on my Recovery & Leaving for Pelenque article.

#1. The Hidden Nightclub in Merida, Mexico

This was by far the most wild and unexpected experience of my trip, and possibly my life. Additionally, this was in first week of my 85 day trip, therefore I was fairly naive about what was about to happen.

I was hanging out a bar in Mexico. I met a Mexican girl named Steffy. I had met her at the bar a couple nights before and we stayed in touch through text and decided to meetup again. She spoke almost no English, and my Spanish speaking skills were absolutely horrible at the time, which meant that our communication was absolute shit. But we managed somehow.

Steffy and I are at the bar and she introduces me to three of her guy friends. They were nice, decent dudes. It gets late and the bar starts to close. We leave. We’re walking and Steffy says “come with” in broken english. So I ask her where. She just smiles. I didn’t know her well and I definitely didn’t know her friends at all. It’s late at night and I’m walking with them down dark streets in Mexico, semi-freaking out in my mind, but keeping my cool. I’m imagining my liver being taken or being held as a hostage. I had no idea what to think.

Finally, after 20 minutes of walking, we arrive at an old warehouse. The door to the building is rusty old metal and must be 200 years old. They knock on the door. About 30 seconds later, a night-club security guard with a radio-headset opens the door. He pats us down, we give him $5/each and we walk inside. Walking through the initial dark room, I get a glance of a decked-out security desk with computer monitors, security cameras and two guys wearing suits monitoring the communications. At this point, I have no f**king idea what’s going on. But now I’m intrigued.

Finally, this security guard walks us through another dark room and the music gets louder. He opens the door…holy shit. This was an underground rave with about 200 people dressed in elegent clothing, sipping the finest beers in the world, and listening to electronic music that I’d never heard before.

The night continued and was incredible. It was a challenge because my Spanish was super rusty at the time, but I managed to do well. Or maybe I did terribly but I was just really drunk. I’ll never know. Anyway, it was an incredible night. I’ll never forget that night.

Unfortunately I have absolutely zero pictures of that night because I was not permitted to take pictures in the venue. And I didnt want to be the annoying “gringo” to break the rules.

An honorable mention to my experiences in Panama

Prior to my 85 day trip, I did an 11 day trip to Panama, which was absolutely incredible as well. My Panama trip involved driving across the entire country, partying in Bocas Del Toro and meeting a lot of unexpected life-long friends.

Check out My 3 Craziest Experiences in Panama >>