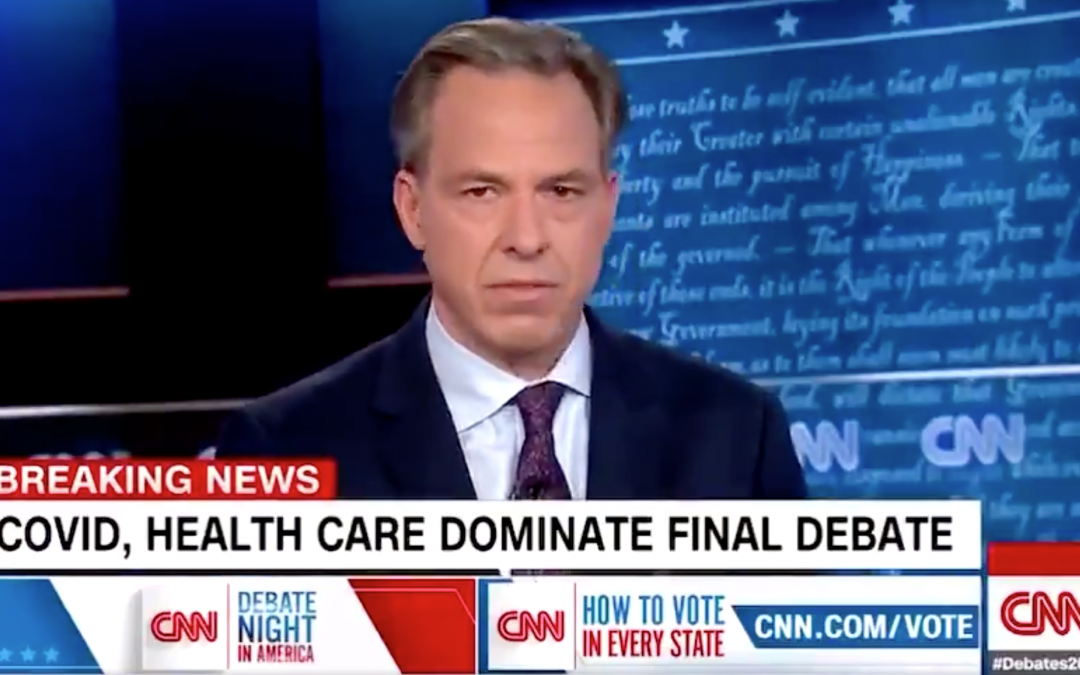 Jake Tapper, the Chief Washington Correspondent for CNN, has been a mouthpiece for their ongoing anti-Trump agenda. Unsurprisingly, he’s still doing the bidding of Joe Biden. Personally, none of this would bother me if Tapper’s representations were truthful. I don’t really know, nor care about, what CNN’s “journalists” have to say. And I’m not a particularly strong Trump supporter. But I absolutely abhor dishonest news.

CNN has gone significantly further toward the extreme left, similar to the Washington Post and New York Times.

I intentionally ignore CNN for the most part now. However, some people are still paying attention. And unsurprisingly, those people continue to be disappointed by CNN’s toxic misrepresentations of reality. From CNN’s unholy inspiration, I even wrote a list of 16 Toxic Games The Mainstream Media Plays (with examples).

Recently Jack Posobiec unearthed a video segment from CNN that shows how unapologetically Jake Tapper spreads misinformation and ignores journalistic standards to push propaganda for CNN’s overlords. Here’s the video of Jake Tapper after the last round of the 2020 Presidential Debates:

To clarify everything that Jake Tapper said, here’s the transcript:

“…the president did it again tonight. He said we’re turning the curve, we’re not going into a Dark Winter, uh, the vaccine’s gonna be here in weeks. None of this is true. Every health expert…including health…yeah…every health expert, including those in his administration Anderson. Every single one, says what Joe Biden said tonight. And, and, they all say that what President Trump said tonight, to the American people, is not true. And, and, this is the fundamental problem with the President’s pitch…is that the country can see that he’s lying about the pandemic.”

No Jake – we see that YOU are lying about the pandemic.

In case it’s not very obvious, much of Tapper’s statement is patently false.

The Covid-19 vaccine was FDA approved and distributed only weeks later, on December 11th, 2020. I already wrote about how the vaccine is now getting politicized and weaponized.

In reality, Trump did reduce the curve (remember, 2.2 Million Americans were projected to die), there’s still no evidence to claim that we’re going into a Dark Winter, the vaccine did arrive only “weeks” later, and numerous health experts, including some in Trumps administration had said precisely what Jake Tapper said was false.

I’ve written numerous times about the long list of health experts and doctors that are pushing back against the mainstream media’s unprofessional abuses of politicizing and weaponizing the Coronavirus.

Let’s not forget, Biden predicted that another 250,000 people (up from his 200,000 estimate) would die from Coronavirus before January hit – he was very wrong. Not only was the vaccine finalized but Biden’s non-sensical fear mongering proved to be factually incorrect.

“But It Was Too Early For Jake To Know”

Yes, exactly. It was too early for Jake Tapper to know what would happen and if his predictions would come true, so why is Jake using faulty predictions to badmouth the President of the United States? I thought this was suppose to be unbiased news. CNN has gone from “covering the news” to speculating and badmouthing opponents in countless ways at this point.

Jake Tapper has completely failed his responsibilities as a journalist. CNN has been dying for a long time. The only reason for their recent uptick is due to their constant attacks on Trump. But what will they do after Trump is gone? Who knows…but who really even cares?

There have been dozens, perhaps hundreds, of instances recently where CNN misrepresented the news. If you missed it, The Washington Post called Covid19 the “Chinese Virus” before Trump ever did. CNN ignored Antifa attacks against MAGA marchers. The NYTimes suggested weaponizing the vaccine against whites. They ignored Tara Reade’s allegations against Joe Biden. I wrote about countless other misrepresentations as well.

That statement was made before Trump even said anything – CNN had already pre-planned their statements about Trump before he even spoke that day. CNN’s vendetta against Trump is relentless.

Here is another notable example of CNN doing everything they can to bolster Joe Biden and to trash President Trump. Unfortunately for CNN, in all their biased glory, some of CNN’s recent stories have left a wake of doublespeak confusion.

In the image above from August, you can see Kenosha buildings and vehicles on fire in the background, while the CNN news reporter claims that it’s a “mostly peaceful protest”. The full video is on YouTube.

I never knew that arson was considered peaceful.

CNN was blasted for this poor coverage. Jake Tapper himself demanded an undeserved apology from Jim Jordan regarding a mashup of videos that he created and presented:

“The video speaks for itself. You had two reporters in that video saying these are peaceful protests while there’s a building burning in the background, for goodness sake. So we just presented the truth.”

CNN tried to cover their tracks by saying that the protests were peaceful earlier in the day. One might think that they would change the headline. Instead, they show a fire raging with the headline “Fiery but mostly peaceful protests after police shooting”.

The Kenosha protests happened in response to the police shooting of Jacob Blake – a man that was in the process of kidnapping a child and was wielding a knife. CNN heavily covered cherry-picked instances of police brutality, yet ignored nearly all the violence from Antifa and BLM, certainly in fear that their coverage will negatively affect Joe Biden’s campaign for presidency.

Nothing New For Jake Tapper

Jake Tapper has been doing the dirty work of left-wing hit jobs for a long time. He started at CNN in 2013.

His laughable coverage of Brett Kavanaugh was one of the first instances where I noticed something was wrong with Tapper – after CNN’s coverage of Christine Blasey Ford’s story fell apart, Tapper started attacking Brett Kavanaugh for heavily drinking back in college. Oh the horrors – college kids…drinking!? Yawn.

Time Magazine has jumped on the same left-wing bandwagon ever since it was bought by Marc Benioff, billionaire and owner of SalesForce. Time praised Blasey Ford for her courage (even giving her a cover award) but Times hardly gave Tara Reade a reasonable glance. Benioff is a Biden supporter, therefore unsurprisingly Joe Biden is now Time Magazine’s person of the year. Also unsurprisingly, CNN named Marc Benioff the “CNN Business CEO of 2020”.

You just gotta love how big politics is an interwoven web.

It’s almost the New Year so Happy New Year! I’ll leave you with this final entertaining clip from Andy Cohen and Anderson Cooper. While I don’t like CNN, I’ll admit that this clip is very entertaining: