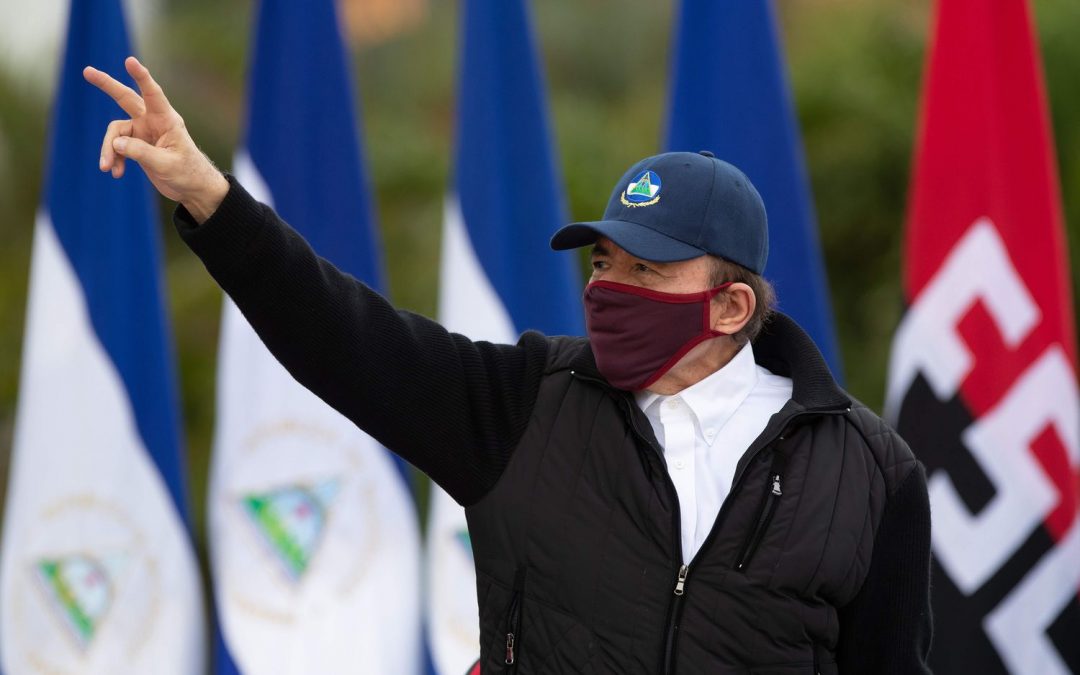 Back in April of 2020, I wrote about how the President of Nicaragua, Daniel Ortega, was a ghost during the beginning of the Coronavirus outbreak. Since then, Ortega has mostly continued to remain a ghost hiding from public view. However, President Ortega has had a few key moments where he stepped into the public eye for a brief moment.

On April 15th, Ortega claimed that Coronavirus was “a sign from God”. Politics in Latin America work differently than in other countries. Religion in Latin America is indifferent to political parties – the vast majority of the population are catholic, both on the left and the right.

Daniel Ortega is a Sandanista, yes the same Sandanistas that New York Mayor Bill De Blasio supported in the 1980’s. Sandanistas are members of Nicaragua’s leftist party called the SNLF which has done a lot of harm to Nicaragua. One only needs to look as far as the hashtag #SOSNicaragua on Twitter to get a glimpse into what Nicaraguans are publishing. “SOS” refers to “Save our ship”. Granted, don’t take my word for it – do your own research.

In any event, recently President Ortega’s ruling over Covid in Nicaragua, or lack thereof, has been called heavily into question.

On June 1st, Nicaragua’s medical associations called for a self-quarantine and demanded that President Ortega urgently take forceful measures to contain the spread of the virus. Likewise, doctors from the public and private sectors signed statements along the same lines. But that didn’t happen. Instead, President Ortega essentially fired the doctors.

This response is inverse from other countries in the world, where Doctors are speaking out against the strict lockdowns, claiming the forceful lockdowns, social distancing, and mask-wearing is essentially useless.

While doctors in other countries are being silenced and censored for speaking out against masks and lockdowns, President Daniel Ortega is firing local doctors that are demanding a more strict response.

Humans Rights Watch (HRW), a once-respected Washington DC human rights organization, has largely criticized Ortega, claiming that he “blatantly contradicts global health experts’ advice“. As my readers know, I’ve lost all faith in HRW, because I’ve seen first hand how they abuse their influence, such as when they misrepresented the truth in El Salvador during President Nayib Bukele’s presidency. They criticize at every chance they get, literally even supporting the violent gang members that butcher Salvadorans with machetes.

Keep in mind, the headquarters of Human Rights Watch is located in Washington DC and acts essentially as a pit-bull terrier on a leash that’s controlled by the Washington DC’s political elite. The “global health experts” that HRW is referring to is the World Health Organization, which has been caught lying to the public recently. Go figure.

In another complete failure from Human Rights Watch, they had this to say:

According to the government’s official tally, Nicaragua has 7 confirmed cases of COVID-19 and has had 1 death. But local health professionals said the total number is unknown and may be higher due to a lack of comprehensive testing. Doctors in hospitals across the country reported sending multiple “suspicious cases” for testing at a Health Ministry facility, Conchita Palacios, but said that it was maintaining tight control over information and had not provided any public statement about the number of tests conducted or the results.

This claim by HRW is entirely unverified, illegitimate, and pure speculation. There’s no evidence or proof to verify that the official numbers being reported in Nicaragua are inaccurate. Granted, we should not trust the government, nor these “local health professionals” – I’ll explain why in a moment. But it’s absolutely astonishing how mainstream organizations ignore and disregard local doctors around the world, yet refer to local doctors when it suits their agenda. This happened recently with Dr. Roger Hodkinson among others.

This is an unverified organization. Nobody knows if it is legitimate.

The Covid-19 Citizen Observatory has been created by unknown persons in Nicaragua – supposedly it’s an interdisciplinary monitoring group of epidemiologists, medical professionals and students working to “fill the void of information about Covid-19 in Nicaragua,” according to its own website. I found all of this information on CNN.

It’s breathtaking that CNN would consider publishing any information from an unofficial group, especially one composed primarily of students and non-medical staff:

“Our team is made up of volunteers, medical professionals (including health professionals and epidemiologists), communication, research, engineering, computer science and students who contribute from their professional tools to make this effort a reality.”

Citizen Observatory – Who We Are

That sounds nice. Good effort. The problem is – there’s no way to verify that any statements from this group are legitimate, hasn’t been corrupted, nor that it offers some degree of validity.

And note – visiting that page, you’ll see that no names of doctors are ever given. This “secrecy” works to their favor. This is a completely arbitrary organization that has no backing, no standing of legitimacy, yet CNN is pushing it as if it’s more official than a government organization. Wow.

A big tip that hinted to me that it may not be a legitimate organization, is the Observatory’s Twitter page. They have exactly 5,492 followers on Twitter right now – yet not one Nicaraguan is commenting on any of their recent posts or Tweets that they put on Twitter. That’s very suspicious. If they were a legitimate organization, that would be very unlikely. Latinos are more active on social media than people in the United States.

My goal is not to belittle what could be a legitimate effort. The problem is that we can’t know if it’s legitimate or not. But don’t be fooled. I’ve lived in Latin America long enough to know of the scams that happen at high levels. This is Latin America, which is known for having unreliable information tracking metrics from governments and private organizations, not to mention unregulated health organizations that operate in secrecy. A major Covid fraud project was uncovered in Brazil last year.

I simply would not trust this organization, just like I would never trust the government of Nicaragua. None of these organizations are trustworthy.

Confusingly, news organizations around the world are appearing to have no fucking idea what they’re talking about. In an article by The Guardian, they stated the following:

“The UK should take the lead from Nicaragua, where early strict measures have kept the coronavirus death rate one of the lowest in the world, writes John Perry. Plus Harry Galbraith on the approach taken by the Isle of Man”

This article by Guardian makes zero sense. These measures weren’t enforced, I can assure you. There was no authority to enforce any measures regarding Covid19. President Daniel Ortega of Nicaragua was successfully promoting mass gatherings and events – not telling people to stay at home.

Others appear frustrated with Guardian’s writing as well:

At this point, I’m convinced that the mainstream media is finally starting to crumble under the weight of their own lies. The problem with dishonesty is that it has a cascading effect, whereby the compounding lies and misrepresentations inevitably grow out of control.

There are so many inconsistencies that I see among mainstream news sources while I’m living abroad. They tell one population one story and another population a different story.

It’s remarkable to be an english-speaker and see their dishonesty about Latin America. The mainstream media uses the language barrier to their advantage and hope that nobody catches on.

If they use the language barrier between English and Spanish as a curtain to hide their lies, then I can only imagine how much they do the same with other languages – such as Chinese, Russian, and many other languages.

So, What’s Up With Daniel Ortega?

Honestly, it’s difficult to know what to make of Nicaragua President Ortega’s handling of the virus. Choosing to hide has mostly been his solution. There’s little, if any, real information from Ortega’s adminstration. And I should mention – our foreign views of the issue don’t really matter. Foreigner perspectives, including my own, were created from false impressions of fear or from information from the World Health Organization, which was dishonest more than once in 2020. Nicaragua is a sovereign nation – what matters is only what Nicaraguans think. Not you. Not me. Nicaraguans.

Furthermore – it’s difficult to know what to believe. I wouldn’t trust CNN’s take on things. Nor would I trust local news organizations in Nicaragua. The only thing I would trust is first-hand accounts from people in Nicaragua.

Living in El Salvador, I can say that people in Latin America don’t trust government, and rightfully so. Governments in Latin America disappoint often. The history of each country is burdened with corruption from each political party. And lets not forget, that the CIA is exceptionally skilled at taking control over latin countries and installing their own leaders.

In the United States, most people prefer freedom. There’s a lot of backlash against lockdowns in the USA, including in blue states like California and New York. American’s culture is based on the freedoms that it once fought for, although undoubtedly those freedoms are being taken away recently.

That’s also the case in El Salvador where I currently live – the people of El Salvador fought for their freedom during Covid, and now they have a higher level of freedom than they had before. And note: I’m still here because I’m somewhat stuck in El Salvador with my pets right now.

When the new President of El Salvador, Nayib Bukele tried to enforce lockdowns indefinitely, he eventually hit a brick wall. The people chose freedom over Coronavirus lockdowns. This happened after famine flags had spread throughout Central America, which is one of the reasons that we started a campaign to fight hunger. The people of Nicaragua are tired. They just faced two Category 4 hurricanes earlier this year. But at least they still have their freedom.

Even with new Covid strains spreading in the world, President Ortega doesn’t appear to have much concern. Nicaragua’s President continue to promote public events and reinforces no Covid19 rules.